Nestled under Hood Mountain in the Sonoma Creek Watershed lies Santa Rosa, a small city in California’s famous wine country that nourishes its citizens as much as its vineyards. The city’s picturesque natural surroundings inspired the creation of 514 acres of park space that not only offer recreational activities and inspiring views, but the parks’ unique structures scattered throughout the city also provide communal bonding through yoga, painting classes, movie nights and more. 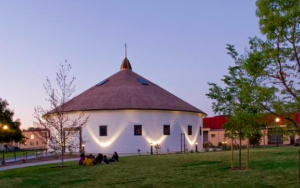 DeTurk Round Barn is one of only two truly round barns left in the state of California. Built in 1890, the barn’s old-growth redwood structure had withstood two major earthquakes, but years of under utilization had left it in a desperate state.

When Santa Rosa officials have the opportunity to rehabilitate city-owned buildings that will eventually host these community activities and be rentable for private events, they cultivate their citizens’ love of Santa Rosa (and ensure the facilities will be used) by asking their opinions. During public meetings, neighbors provide feedback about design ideas to guarantee the renovated spaces will meet citizens’ needs without negatively impacting their neighborhoods.

In a modern-day twist on barn raising, the DeTurk Round Barn’s renovation was made better because its neighbors were adamantly against Santa Rosa Recreation & Parks department’s plan to construct a number of ancillary buildings in which to house a kitchen, restrooms, and mechanical and electrical equipment for the barn. Because the barn is situated in the middle of a residential neighborhood, neighbors were concerned additional buildings would detract from the view of the actual barn. The neighbors also were inspired by the barn itself during the public meetings held in the space.

“The first time I walked into the barn, I thought I wanted to own it myself,” recalls Kevin Teel, project architect with TLCD Architecture, the Santa Rosa firm hired to design the retrofit. “Even though all the lower windows were covered with plywood and black plastic, there was plenty of natural light coming in from the skylights, and it was an amazing space to walk into. I think it was a spectacular place to host the public meetings because you had the emotions of the place and the ability to visualize bringing it around to where it is now, as well as the immediate reactions of the public.”

Although the community’s feedback reduced the project scope by 60 percent, it didn’t reduce the challenges TLCD Architecture would face. The firm still needed to rehabilitate an extremely unique (and extremely dilapidated) 8,300-square-foot round barn while maintaining its historic integrity and invisibly adding a kitchen, restrooms and storage, as well as integrating 21st century systems and audiovisual technology to ensure it would become a popular event space.

DeTurk Round Barn is one of only two truly round barns left in the state of California. Isaac DeTurk, one of Sonoma County’s first vintners, commissioned the barn in 1890 for his prize-winning racehorse, Anteeo. The barn’s old-growth redwood structure withstood two major earthquakes, but years of under-utilization had left it in a desperate state. By 2009, city officials feared a forceful windstorm would be enough to blow it over. 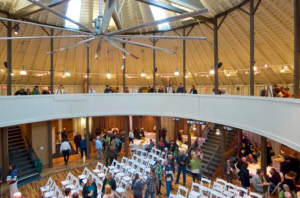 A wedge created below the mezzanine—formerly the hayloft—allowed the design team to hide the kitchen, restrooms and equipment rooms.

As work began in late 2009, TLCD Architecture and its dedicated team of contractors and subs applied several structural solutions that will ensure the barn withstands another 100 years of northern California weather and earthquakes. First, the entire building was lifted off the ground for two months while the structure was reinforced and upgraded.

“The rotting sill plate and about 6 inches of all the studs were cut off to install a new pressure-treated sill plate while the foundation was poured,” Teel says. “A 6-inch curb was added around the outside edge, and we set the building back on that. Because we poured a sidewalk around the whole building per ADA requirements, any water that drips off the roof—the building never had a gutter and was not allowed to have a gutter—is splashing against the concrete curb instead of the wood in the base of the barn.” The concrete curb was painted white so it disappears into the white wooden structure of the barn to maintain the barn’s status on the National Register of Historic Places and California Historical Landmarks lists.

Theater Was Structurally Altered and Fitted with New Electrical Infrastructure