During World War II, the Ford Assembly Plant and its outbuildings in Richmond, Calif., mobilized to build tanks, jeeps and armored vehicles destined for the Pacific theater. These vehicles were often built by women, famously earning them the nickname “Rosie the Riveter”.

When the U.S. entered World War II after the bombing of Pearl Harbor on Dec. 7, 1941, President Franklin D. Roosevelt prohibited production of civilian automobiles, intending that the country’s industrial power be focused on the war effort. Automobile manufacturing plants across the nation mobilized to build the tanks, ships, planes, jeeps and other vehicles needed by the 16.1 million Americans who served in the war. 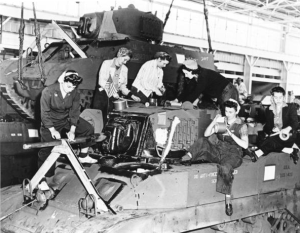 During World War II, the Ford Assembly Plant and its outbuildings in Richmond, Calif., mobilized to build tanks, jeeps and armored vehicles destined for the Pacific theater. These vehicles were often built by women, famously earning them the nickname “Rosie the Riveter”.

Among these factories was the Ford Motor Co. Assembly Plant in Richmond, Calif. Built in 1930, overlooking San Francisco Bay, it was the largest factory on the West Coast at the time, spanning 517,000 square feet. During WWII, the plant was called “Richmond Tank Depot” and assembled tanks, jeeps and armored vehicles destined for the Pacific theater.

While the nation’s men, predominantly, were serving an average 16-month tour overseas, more than 6 million American women took their places in the workforce. A 1943 Newsweek article states: “They [women] are in the shipyards, lumber mills, steel mills, foundries. They are welders, electricians, mechanics, and even boilermakers. They operate streetcars, buses, cranes, and tractors. Women engineers are working in the drafting rooms and women physicists and chemists in the great industrial laboratories.”

By the time WWII ended, U.S. factories had built 296,429 airplanes; 102,351 tanks and self-propelled guns; 372,431 artillery pieces; 47 million tons of artillery ammunitions; 87,620 warships; and 44 billion rounds of small-arms ammunition. Time called America’s wartime production a miracle; it was likely a miracle that would not have happened without “Rosie the Riveter”, the famous moniker given to the women who supported the war effort on the home front. (Read “Where Did ‘Rosie the Riveter’ Get Her Name?”, page 3.) And, yet, for decades after the war, Rosie’s efforts went largely uncelebrated—until now. As part of a $40 million adaptive-reuse renovation to Richmond’s former Ford Assembly Plant and outbuildings, Rosie finally has a home, a visitor center managed by the Washington, D.C.-based National Park Service, that celebrates her dedication and courage.

Worthy of Being Saved

During WWII, the city of Richmond hosted 56 different war industries, more than any other U.S. city of its size. In 1940, Richmond boasted a population of 23,600 but amassed more than 100,000 people by 1943 because of war-job opportunities. Many of Richmond’s buildings that contributed to the war effort remain intact today. Consequently, NPS believed the city was an appropriate place to host the future Rosie the Riveter WWII Home Front National Historical Park. 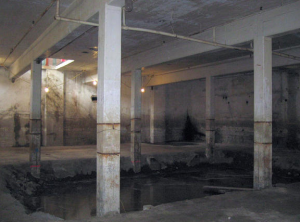 Among the city’s intact WWII-era buildings was the Ford Assembly Plant. After the war, male workers returned to making Fords, but the plant closed in 1955 and was used for storage by various industries until the Loma Prieta Earthquake of 1989 closed it for good. “The structure was highly deteriorated,” recalls Marcy Wong, a partner with Marcy Wong Donn Logan Architects, which has offices in Berkeley, Calif., and San Francisco. The firm worked closely with the property owner, Emeryville, Calif.-based Orton Development; NPS; the California State Historic Preservation Office; City of Richmond Redevelopment Agency; and SunPower Corp., which would become the facility’s largest tenant. “Not only was it damaged to a severe degree by Loma Prieta, but it was also subjected to very harsh weather since it’s right on the waterfront, so there was corrosion, as well as earthquake damage.”

The building’s state of disrepair did not deter Eddie Orton, president of Orton Development. Over the years, he attempted to buy the property three times before his offer was finally accepted. In a 2010 SFGate article, Orton states: “There are a lot of historic buildings that don’t deserve being saved. This is actually one that does. It is truly one of the masterpieces of the greatest industrial architect in American history.”

Designed by Albert Kahn, who was renowned for innovations in factory design, the plant was referred to as the “daylight factory” because of its saw-tooth roof composed of skylights and its brick façade containing continuous horizontal spans of window glass.

“Kahn was Henry Ford’s architect of choice,” Wong explains. “He had designed untold millions of square feet of factories not only for Ford, but for some of Ford’s competitors at the time. Albert Kahn didn’t really consider himself an architect the way other architects do. He was very pragmatic, which is probably why Henry Ford liked him. It was all about what works, how to make the factory the most efficient and providing an environment that would make the workers more efficient.”

Despite the beauty of the building’s architecture, Ivonne Inurritegui-Folster, Orton Development’s asset manager, was alarmed by its state of disrepair when she first walked into the Ford Assembly Plant in 2004. “I am 20 years with the company, yet when I went the first time to the Ford building I wondered how we were going to do this. It was incredibly shocking! Every piece of glass had to be replaced. However, the corporate offices for the Ford Assembly Plant were in good shape; they had that character—the marble everywhere, big stairs to the second floor—that transports you to that time and era.” These were features Wong and Orton Development would strive to save.