Perhaps more important is to design a space that doesn’t invite vandalism. Sometimes it’s as easy as creating enough space for interaction between patrons. In school restrooms, you might consider providing kids the opportunity to release their creativity in a constructive way by using the new dry-erase wall paints. Or follow the lead of a professor at Mississippi State University, Mississippi State, Miss., who conducted a study in the early ’90s about restroom graffiti. He posted signs in a restroom that read “A local licensed doctor has agreed to donate a set amount of money to the local chapter of the United Way for each day this wall remains free of any writing, drawing or other markings.” During the 50 days the study was conducted, there was no graffiti in the restroom. Not only will the signs deter graffiti, but this is a great opportunity for a local business to become charitable in its community, as well. 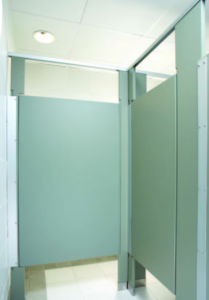 Lighting must be addressed as a major design element. There is nothing worse than those stadium-colored bulbs that cast blue or green light to make a girl feel special. When designing public-restroom spaces, I work with Ken Reynar, principal of Park City, Utah-based Light Solutions. Although Reynar is seeing a trend toward using LEDs in commercial-space downlights, he still specifies compact fluorescent lamps in areas where color consistency is important.

“LED is a cool technology and is making great strides every month in terms of quality,” Reynar says. “However, some of the cheaper, off-brand LEDs that are flooding the market right now have terrible color. I would recommend using LED sources from reputable manufacturers. If you’re retrofitting in place of incandescent lamps, go ahead and use LEDs but be careful which LEDs you source. It’s always a good idea to first look at a sample of the light source you’re thinking about using so you know what to expect.”

In more elegant public restrooms, don’t just fixture the ceiling. Surface-mounted decorative fixtures should be added to vanities via sconces to provide lovely warm light directed toward the face. Overhead lighting casts downward shadows over the face and, unless you’re the girl in the Twilight series, it’s not the best look. Just shine a flashlight over your head in a dark space and you’ll catch my drift.

Call me old school, but I like a women’s restroom with a vanity area separate from the sinks. Women like to touch up their lip gloss or fix their hair, so don’t force them to position themselves over sinks while other ladies are trying to wash their hands. Further, a vanity area allows a lady to place her handbag on a dry counter instead of a possibly wet counter next to a sink.

I also prefer toilet rooms versus partitions for a more finished look. Many view this application as expensive to construct, but there are some clever ways to achieve this effect and cut costs. Use full-height doors for each commode space executed into a solid full-height wall. Between the commode spaces, use partial walls that are suspended and not touching floors or ceilings. Partial walls allow for a better mop job from space to space. Everyone appreciates “clean.” Personally, if a public restroom is not clean, orderly and well kept, I have a hard time imagining management is being attentive in other areas.

Public restrooms should be memorable in a good way. A few simple amenities in the public powder can improve upon a patron’s overall experience at an establishment and keep him or her coming back again and again.

Be the first to comment on "Public Restrooms Should Be a Facility’s Highlight, Not An Afterthought"