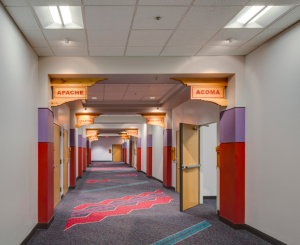 The Albuquerque Convention Center undertook the upgrade of the East Complex, followed by a $20 million facelift of the West Complex. Lighting upgrades were necessary throughout.

Nestled between the stunning Sandia Mountains and Rio Grande River, the Albuquerque Convention Center prides itself on offering a venue that is “uniquely unconventional.” To better reflect Albuquerque’s history and surroundings, the Albuquerque Convention Center undertook the upgrade of the East Complex, followed by a $20 million facelift of the West Complex. The goal of the project was clear: Make the space more attractive to lure additional tourist dollars to the area.

But another key part of the renovation story revolved around energy usage. As one of the city of Albuquerque’s highest energy consumers due to lighting and HVAC requirements for the sprawling 167,000-square-foot facility, the Albuquerque Convention Center was a prime candidate for the City’s Energy Council Three Percent Program, which sets aside 3 percent of capital improvement bonds specifically for energy-conservation projects. According to Tony Gurule, Energy and Sustainability
Manager for the City of Albuquerque, “As we looked at the [convention center], it’s a big user, so we had to see what we could do to lower the cost of the building maintenance and the use of electricity.”

SOLUTION
As part of the project, the city did a mock-up study of various LED lighting manufacturers, and two solutions emerged: Cree and Lutron. Together, they offered complementary pieces of the lighting and control picture to deliver an ideal solution for the Albuquerque Convention Center. 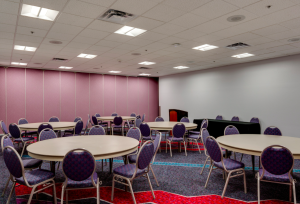 The Cree solution for the Convention Center Complex included the Cree CR Series architectural LED troffers; the CS14 LED linear luminaire; and the CR6, SR6 and LR6 LED downlights. Powered by Cree TrueWhite Technology, these Cree LED fixtures provide an exclusive combination of efficacy, exceptional quality of light and consistent color temperatures. The Cree luminaires with the Lutron Ecosystem control system not only provided significant reductions in energy and maintenance costs, but they added new dimension to the staff’s ability to sell the space.

According to Gurule, the decision was “primarily based on the energy saved and the payback period in which we will recover the initial installation investment in cost savings on the operating side.” But lighting quality was important, as well. “The reason Cree was selected was the light output, the quality of light and fixtures, the warranty and how they interacted with Lutron in terms of controllability,” states Gurule. Light output was important. Not only did the fixtures make the space seem brighter, they were also more efficient.

With the Cree and Lutron LED lighting solution, the Albuquerque Convention Center now has the ability to tailor the lighting regardless of whether it’s a large event or a more intimate use of the space. Bright lighting for educational events can easily transition to dimmable lighting for weddings and quinceañeras. The controllable lights can now even be used to personalize the space with initials or a special message — a key differentiator when potential customers are evaluating venues. 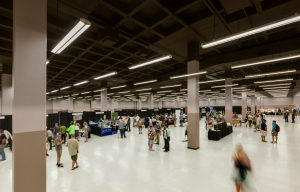 The winning combination of quality lighting with the flexibility of controls allowed the Convention Center staff to improve already-popular spaces.

The winning combination of quality lighting with the flexibility of controls allowed the Convention Center staff to improve already-popular spaces. According to Tom Curtis of Resource Lighting, “In all cases, it appears that the light levels are higher. We were replacing old T12 cool white lamps with 90+ CRI Cree TrueWhite Technology. It’s truly amazing how much more of the building is usable now compared to before. The building seems much larger because of this.”

BENEFITS
As the city of Albuquerque has realized through this project, one of the main advantages of LED lighting is reduced power consumption. Cree LED lamps and luminaires use just a fraction of the energy required to operate traditional lighting. As energy demands rise, the carbon reduction and cost savings from upgrading to Cree LED lighting with a Lutron Ecosystem control system will continue to reduce operational costs.

The anticipated benefits of the Albuquerque Convention Center Complex’s upgrade to an LED lighting system are numerous. Compared to an industry-standard lighting load of 40 percent, the convention center in the last year has reduced its lighting energy usage to just 7.6 percent—an annual savings of over 32 percent. Yearly maintenance costs should also drop by $120,741—a 98 percent savings for the city of Albuquerque. And because the energy load savings were so significant, the convention center was able to avoid a costly upgrade to the HVAC system. All these savings lead to a projected payback of just 3.7 years.

“People are finding the upgrades in the Complex very attractive,” says Gurule.

The quality and flexibility of the Cree LED lighting solution improve already popular spaces. Tony Gurule sums up the results of the Convention Center Complex lighting installation: “The fact that we went through and installed some lights is secondary to the quality that came out of it and the benefit to the city and the economic development that should follow.”

Guerrilla Lighting Installations To Chase the Sun Across the Globe