For travelers to a new destination, airports are often the front door to a city and region. A thoughtful, well-designed air terminal can make a lasting and positive impression upon the traveling public. As public buildings, airport terminals can say a great deal about the communities they serve. Through their architectural expression, they can speak to a sense of place, as well as broader community values. The reimagined Terminal 1 at Raleigh-Durham International Airport (RDU) accomplishes both. 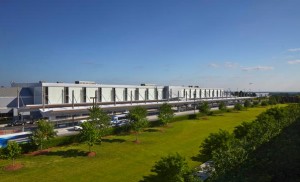 RDU is located between Raleigh and Durham, N.C., at the edge of the world-renowned Research Triangle Park (RTP). RTP is an often-copied research model, on the cutting edge of numerous research initiatives. It plays a significant role in the economy of the region, as do the area’s three major universities. RDU is the shared communities’ connection to the world.

Terminal 1 has an interesting history. The building was originally designed as a hangar and airplane maintenance facility. As such, there are numerous long-span conditions on the airside of the building to accommodate airplane hangar doors. Concrete floor slabs are reinforced and 8-inches thick to handle the concentrated loading of commercial aircraft. For reasons still unclear, the building has an odd column bay dimension of 26 feet, 8 inches. Within several years of its completion, owing to a dramatic increase in passenger count and the building’s central, runway-adjacent location, it was converted for use as a “temporary” terminal.

Over the years, many changes occurred to this building. Additions were made to expand gate capacity. Several interior renovations were implemented to aesthetically update the terminal and provide for passenger amenities, such as retail options and food services. Post 9/11, TSA security systems were installed in an awkward fashion and location. Changes were made in a piecemeal fashion, making wayfinding and passenger circulation confusing. The same unclear circulation patterns impact airline employees, airport workers and vendors. 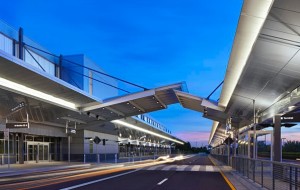 From the landside approach to the terminal, the project presents a new and architecturally exciting face.

In 2011, following the completion of the new Terminal 2, the Airport Authority turned its attention toward the extensive renovation of the “temporary” Terminal 1. As envisioned, Terminal 1 would serve economy airlines, and Terminal 2 would serve mainline air carriers willing to pay higher gate fees for the added amenities made available to their passengers.

Throughout this project, Clark Nexsen’s Raleigh office worked closely with key members of the RDU airport staff. Airport representatives have a history of supporting and understanding the added value that design can bring to their projects. Their challenge to the design team was clear: reimagine the terminal with the goal of transforming the passenger experience.

The 165,000-square-foot Terminal 1 had been known as the “Blue Box” because it had been clad in blue corrugated metal and was simply rectangular in form. The interiors were dated and worn. Moving through the sequence of arrival/ticketing/TSA screening/hold-room waiting/boarding was confusing and, for many travelers, stressful. Landside interiors were dark and segregated. Hold-room lounges infringed upon the concourse and offered limited views to the airfield. In short, this facility did not meet the expectations of current-day air travelers.

Jeffrey S. Lee, FAIA, is a nationally recognized architect and design advocate whose work has been honored with more than 50 AIA design awards. Based in Washington, D.C., Lee is a principal and design director of architecture and engineering firm Clark Nexsen.