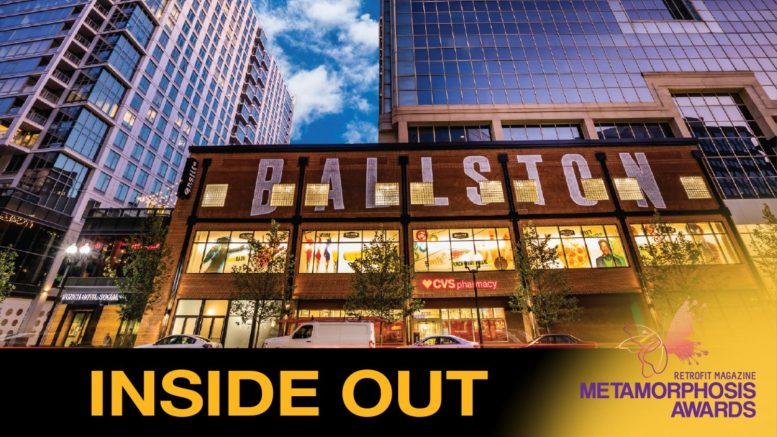 When the doors reopened on the renovated Ballston Quarter in Arlington, Va., last year, visitors were thrilled with the fresh mix of retail and dining options and captivated by the development’s stunning design transforming a dated, enclosed shopping mall into a dynamic, open Main Street experience.

The intriguing design of Ballston Quarter has been decades in the making. Through multiple iterations and an increasing mix of uses, the center’s evolution mirrors larger societal shifts and the needs of the immediate surrounding community—from the advent of parking garages to the online shopping revolution to blending public and private realms for modern placemaking. By enhancing the existing infrastructure, blending indoor-outdoor spaces and creating destination-worthy community spaces, the third time is definitely the charm.

In fact, the project earned the design team, a collaboration between Cooper Carry and CallisonRTKL, First Place in the Mixed Use category of retrofit’s Metamorphosis Awards.

First, a quick history lesson: For those old enough to remember the heyday of the original Ballston Quarter, which was then called Parkington Shopping Center, images of time-worn retail storefronts, eateries dishing out American classics and mid-century modern decor immediately come to mind.

Parkington Shopping Center—the first of its kind for the Washington, D.C., area—encapsulated the traditional shopping center of the 1950s, a fairly new concept as hundreds of similar centers began popping up across the nation, from major cities to small townships.

Shoppers flocked to explore the modern idea of an all-in-one shopping and eating destination. However, by the time the 1980s rolled around, this once-trailblazing shopping center was outdated and required a new approach to the consumer experience. Referred to as Ballston Common Mall, the retail center received a substantial expansion in 1986 led by RTKL (now CallisonRTKL) for owner Forest City (now Brookfield Properties) in partnership with Arlington County to once again appeal to the next generation of shoppers.

By the arrival of the millennium, the property was due for another update. With retail facing headwinds as a result of the digital pivot that transpired in the early 2010s, Ballston Common Mall had become a shell of its former self with foot traffic dwindling and several stores closing their doors. Still, people crave common spaces to gather and explore. For the latest transformation, Cooper Carry served as Architect of Record and collaborated with CallisonRTKL, which also acted as Design Architect, on the redesign of the mall. (CallisonRTKL provided full Design Architect and Architect of Record services on the project’s new-construction residential tower.) A true collaborative effort, Gensler and HapstakDemetriou+ also contributed to various interior spaces throughout the property while significant public investment from the county made the holistic design approach possible.

The main issue at hand? Discovering a foolproof way to make the mall more appealing to local shoppers and visitors. Traditionally enclosed malls have fallen out of favor with the rise in outdoor malls and mixed-use developments catering to a variety of tastes and needs. With Brookfield Properties in pursuit of vibrant shops and exciting restaurants to diversify the tenant mix and draw new visitors to the freshly rebranded Ballston Quarter, the design team was charged with repositioning the architecture of the site to best showcase its slate of new offerings. The team decided to rework the design from the inside out, establishing a plan that would create a thriving mixed-use destination anchored by green space for the modern age.

Located along bustling Wilson Boulevard, Ballston Quarter is a cultural landmark for the area. This status prompted the design team to craft an environment that celebrated the historical reference points, including keeping a large section of the existing brick exteriors and extending the material into the interiors. The building skin was also outfitted with black-framed windows and large painted signage proclaiming “Ballston”.

Ballston Quarter also is directly adjacent to the Washington Capitals hockey team’s MedStar Capitals IcePlex that sits atop an eight-level parking garage and sees more than 1 million visitors each year. Yet the previous mall lacked easy connections to capture these visitors. In the new design, multiple exterior entryways, pedestrian bridges and escalators work together to enhance circulation and connectivity throughout the development, facilitating a more porous environment that better addresses the street and engages pedestrians. The multi-level design of the remaining enclosed atrium creates a vertically connected hub of dining, shopping, entertainment, recreation and experiential uses that directly engages visitors regardless from which level they enter.

Perhaps the most impactful step, however, in rehabbing the decaying mall was to remove the roof to unveil an open-air architecture that was more palatable to emerging tastes. With portions of the roof strategically extracted, the traditionally enclosed mall could now present as the exact opposite, creating an open-air, multi-level network of space. To further deliver an attractive base for shops and restaurants coming to the center while keeping the core of the mall intact, the design team repositioned storefronts to face outward toward the street.

BLURRING THE LINE BETWEEN INDOOR AND OUTDOOR

Previously enclosed and hidden within the structure, the street-facing storefronts now enliven the adjacent sidewalks and create an active pedestrian experience. The visually appealing façade, anchored by experience-driven restaurants and entertainment concepts, including Punch Bowl Social, 5 Wits, Ted’s Bulletin and True Food Kitchen, are the gateway to a mix of locally owned retailers and service providers, such as Steadfast Supply, Grooming Store and Cookology.

At Ballston Quarter, the outdoor experience was intricately designed to complement the shops and restaurants present at the center. Public gathering plazas were created along Wilson Boulevard for guests to gather and linger longer while restaurant patrons spill out onto patios, further activating the streetscape.

The street environment surrounding Ballston Quarter was drastically altered by extending the site’s existing curb line farther out on Wilson Boulevard, narrowing the road and making it possible for pedestrians to amble along wide sidewalks to check out new retail and restaurants. This “road diet,” which nixes one lane of Wilson Boulevard and leaves three with street parking, slows down traffic and allows pedestrians to cross the road more safely.

Where the atrium of the previously enclosed mall stood, an outdoor gathering plaza takes its place. The plaza, anchored by an expanse of green space, amphitheater-style seating and a public performance stage, abuts the Quarter Market, one of the largest food halls in the region. Spanning 25,000 square feet, the Quarter Market is an exercise in control for visitors, offering 18 unique eatery concepts thoughtfully assembled from the best-known chefs in the city. The interior space offers an industrial, warehouse inspired aesthetic that seamlessly connects to the outdoors via operable glass garage doors. This feature solidifies the indoor-outdoor environment today’s guests crave in public spaces.

To enhance natural lighting and connectivity, a European-inspired stairstep entryway that leads guests to Quarter Market was created. The oversized stairs serve as a place to gather, relax and catch up with friends while the lower level opens out as an open-air plaza with restaurant seating and a performance area for live music, entertainment and event programming.

CONNECTING WITH THE COMMUNITY

Retrofitting older buildings comes with its significant share of challenges, which can be further complicated when the community feels left out of the decision-making process. To navigate this process, Cooper Carry and CallisonRTKL worked closely with the developer to ensure the needs of local residents were heard and met.

A key example: One of the final components of the Ballston Common Mall was a pedestrian bridge connecting the mall to the nearby Metro station. The bridge was frequently used by locals to access the train. At the urging of the community, the development team and county sought to upgrade the pedestrian bridge for public use and through a design competition enlisted Cleveland-based TECHNE Architects to replace the existing bridge. Now sporting an angular, geometric design, the revamped bridge is a reminder of Ballston Quarter’s central place in the fabric of the densifying neighborhood.

From an undervalued shopping center to a walkable, mixed-use destination offering sought-after restaurants, in-demand retail shops and a variety of entertainment venues, Ballston Quarter represents an Arlington that is evolving for the future. The success of the private-public partnership is expected to generate $150 million in direct tax revenues for Arlington County during the next 30 years alone. Facilitating a blended environment, the re-envisioning and renovation of Ballston Quarter has transformed the center into a vibrant space that will continue serving as the region’s community hub for the next century.

As principal-in-charge of Cooper Carry’s Washington, D.C., office, David W. Kitchens, AIA, has made the office an innovator in the urban design and architecture of mixed-use projects that create walkable community environments and transit. Lauren Perry Ford, AIA, LEED AP BD+C, is an associate principal with Cooper Carry. She specializes in integrating vibrant retail and entertainment uses within the context of the larger mixed-use urban environment.

An Industrial Facility Now Exhibits, Retails and Educates about the Craft Arts