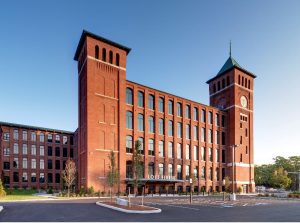 If you were an American in the 20th century, chances are you owned something made at Malden Mills. Located in Lawrence, Mass., Malden Mills’ imposing brick buildings with their copper-roofed clock tower were at the center of the nation’s textile industry—first as one of the largest producers of worsted wool and later as the home of Polartec Fleece. Even as the city itself struggled, Malden Mills filled a crucial role as a major employer and a symbol of local pride.

In late 1995, that legacy went up in flames. The largest fire Massachusetts had seen in more than 100 years tore through Malden Mills, gutting the complex. Although the owner continued to pay displaced employees and built a modern facility (becoming a national figure in the process), many of the original mill buildings closed, sitting empty as a reminder of a more prosperous past.

For more than a decade, the unused Malden Mills embodied the challenges facing Lawrence—familiar to many of the Northeast’s former industrial high unemployment, poverty and urban decay. But a recent transformation has revitalized the previously forlorn structures. Now considered central to Lawrence’s upward trajectory, the rebirth of Malden Mills as Loft Five50 shows the value of public and private stakeholders coming together for thoughtful redevelopment and reuse.

When Boston-based Winn Development purchased the property in 2011, the company set its sights on reimagining the main Malden Mills structure as an affordable multifamily residential community. With a record of successful conversions throughout the Northeast, Winn Development based this latest purchase on three factors: an understanding of the community’s crucial need for affordable housing; a related desire for a source of renewed local pride; and a longstanding relationship with a number of dedicated partners, including design and master planning firm The Architectural Team Inc. (TAT), which is based in Chelsea, Mass., and is nationally recognized in adaptive reuse and historic preservation.

Named for its address at 550 Broadway, Loft Five50 has great bones with high ceilings and numerous, large windows necessary for industrial use lending themselves well to residential conversion. In addition, the structure offers the kind of unique architectural features that draw people to historic tower and the stairway tower that bookend the building, for example, made it clear to the project team that Loft Five50 could present a unique, compelling story to a new generation of people who call Lawrence home. However, because it originally was constructed in the 1860s and had sat dormant for so long, the building’s adaptation was far from simple.

The age and condition of the former Malden Mills meant a comprehensive rehabilitation was necessary. However, because the building is listed on the National Register of Historic Places, the conversion also had to meet specific Washington, D.C.-based National Park Service and Massachusetts Historic Commission standards for historic preservation. A complex-enough process to navigate on its own, in this case, the design team led by TAT project manager Nick Kane had to restore and preserve the landmark elements, yet also decrease the carbon footprint. 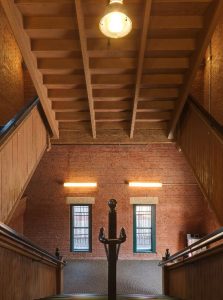 Historic features of the mill are restored and preserved.

From the start, Winn Development set a goal of reaching LEED-certifiable status. The paths of LEED certification and National Park Service standards rarely intersect; in fact, the most direct ways of achieving the former often run counter to the tenets of historic preservation. But as the development team has learned during decades of historic preservation and adaptive reuse, much of the joy in these projects comes from finding ways to be creative within a set of strict parameters. It helps to cultivate strong relationships with agencies that oversee historic designations, and Loft Five50 was no different. On the painstakingly restored (and now-functioning) clock tower, for example, the project team received
special permission from the National Park Service to add LED light strips into the granite below the clock face, providing nighttime illumination without visibly changing the tower’s appearance.

Throughout the building, new, low-E glazed, triple-light windows replicate the look of the original awning-style ones. This modern solution supports the project’s energy efficiency and sustainability goals, as well as its historic preservation requirements. The new window assemblies deliver saturating daylight while reducing solar heat gain and UV penetration and minimizing thermal bridging. They also reduce air infiltration substantially better than the originals. Combined with newly insulated exterior brick walls, the windows were instrumental in reaching LEED for Homes-certifiable status. The existing brick, of course, reduced the need for new energy-intensive materials, such as aluminum, plastics and steel.

Other historic features were restored and preserved, such as the 20-foot-high clerestory ceilings, wood beams and columns. The project team also exposed impactful elements, like interior brick walls and select original staircases. Years of neglect and tacked-on ancillary features had to be addressed, too, which meant removing non-historic bridges, oil-tank sheds and loading docks. To tell the story of Loft Five50’s past as Malden Mills, the project team also repurposed the metal-clad fire doors and decorated the common areas of the 75 units with pulley and flywheel assemblies and original photography depicting the previous state of the mill. The idea was to strike a balance between old and new, reimagining the architectural fabric for new use while preserving its industrial heritage.

Another benefit of converting an old mill building like this one into homes is that the units are large—the average square footage of a Loft Five50 home is twice the size of an average modern housing unit, and 65 percent of the building’s homes have two or more bedrooms. The remainder of Loft Five50’s homes are studio or one bedroom units. Across all unit sizes and layouts, the project offers efficient, well thought-out housing.