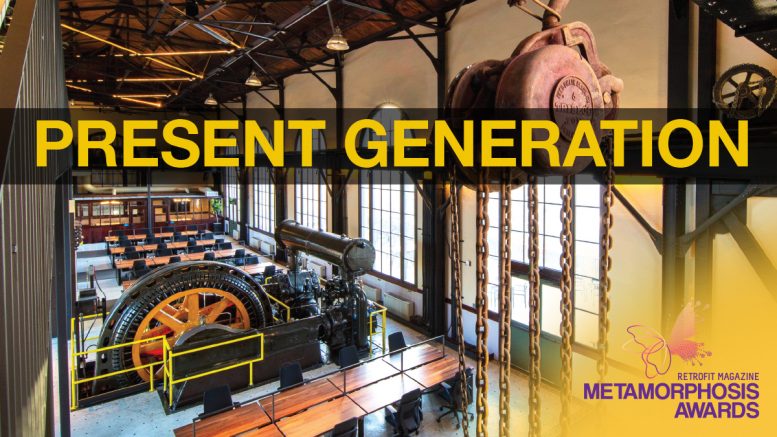 Pier 70 on the San Francisco waterfront recalls a prominent and fascinating history. With more than 150 years of continuous ship production and repair, Pier 70 was influential in the West Coast’s industrial development and U.S. naval activities from the Spanish American War through World War II. Bethlehem Steel had a large role in the pier’s evolution but when the company went bankrupt, the Port of San Francisco stepped in to purchase the site.

By 2010, most of Pier 70 was vacated, and the Port completed a redevelopment masterplan that honors the site’s historic significance. Orton Development Inc. won a public-private partnership with the Port for a subsection of the masterplan called the Historic Core, and Bethlehem Steel’s former powerhouse was one of the core’s eight structures. (Read about four other Historic Core structures’ renovations in retrofit’s November-December 2019 issue. These projects won 2019 Metamorphosis Awards.)

“We specifically started on the portion of the site with important, historic buildings that needed the most care and attention,” says James Madsen, partner at Orton Development. “Pier 70 was Bethlehem Steel’s West Coast headquarters and even their purely utilitarian structures were stunning buildings designed by master architects.”

The 1912 historic powerhouse generated compressed air to power shipyard tools and served as an electrical substation that transformed and distributed electrical power to shipyard operations. Although the building contained a bridge crane and pneumatic compressors, the structure had Beaux Arts detailing, a mission-tile roof and mosaic-tiled flooring.

Orton Development worked with Marcy Wong Donn Logan Architects and Preservation Architecture to design a rehabilitation that met the Secretary of the Interior’s Standards for the Treatment of Historic Properties and was compatible with the powerhouse building’s listing on the National Register of Historic Places. The team managed to retain the project’s historic character, receive hard-won tax-credit funding from the State Historic Preservation Office (SHPO) and produce a creatively reimagined office space. In fact, the inventive project earned Marcy Wong Donn Logan Architects the First Place prize in the Historic category of retrofit’s second-annual Metamorphosis Awards.

BEFORE PHOTOS: Jeremy Regenbogen and the Port of San Francisco; AFTER PHOTOS: Billy Hustace and Marcy Wong

Located at the base of Potrero Hill in the Dogpatch neighborhood, Pier 70’s Historic Core is zoned for a wide range of uses, from light industrial to office. One of the powerhouse project’s main challenges was making the originally 15,500-square-foot project financially feasible. “It had a small footprint but the building still required all the expenses of a modern retrofit, including new utilities, ADA compliance, seismic bracing, and fire- and life-safety requirements,” Madsen notes.

The four enormous historic compres- sors inside the powerhouse further constricted the limited space. To create enough usable tenant square footage, the team needed a novel solution. But the project was under high scrutiny, not simply from multiple historic preservation agencies, but also neighborhood groups, advisory boards and the port. Often, these varying organizations’ priorities were at odds with each other.

“It was an exercise in revision, presentation and collaboration with all these groups,” Madsen says. “There was a real sense that something had to be done. Everyone wanted these buildings to be saved before it was too late, but it took nearly two years to get everyone on the same page.”

The approved design removed three compressors on the main level, inserted a partial mezzanine and built a 2,600-square-foot addition.

“Keeping one compressor helps showcase the building’s character and history and provides an asset to the tenant,” Madsen says. “These projects continue to make sense despite all the challenges because companies with creative cultures seek out special workplaces.”

The team put down carpeting where the three compressors had been removed as a reminder of their former presence, and they restored the main level’s mosaic tile flooring. In addition to the historic floor tiles, the project refurbished the original hardwoods, brass railings, wainscoting and original factory lighting fixtures in the space.

The new mezzanine is constructed of heavy timbers to complement the exposed wooden roof. Lining the building’s south and west sides, the open mezzanine overlooks the main level. Beneath the 12-foot ceiling created by the mezzanine, the team added a concrete reception desk facing the entrance door. A hardwood wall at the entry defines the reception area from the main level’s open workspace.

Workstations on the mezzanine are tucked into the tall window archways, offering unique views to neighboring historic buildings. New steel mezzanine balustrades and the steel stairwells that traverse the mezzanine, main floor, and lower level are modern in design but aesthetically relate to the historic steel roof trusses visible from below.

The project required a great deal of structural- steel bracing to meet current seismic code, and the team incorporated the mezzanine’s construction into the new bracing.

To support the walls and maintain the historic façade, careful staging and intensive metalwork took place. More than 50 sections of heavy steel—many measuring more than 12-inches square—were threaded through holes in the wall piece by piece and welded together inside the structure.

Adding an elevator for ADA compliance was a similar effort. The elevator shaft’s steel was incorporated piece by piece to create a massive seismic brace in one corner of the building. Much of the bracing was hidden in required architectural elements, like the elevator shaft, and the bracing that remained was painted to match the walls.

The crew added more bracing in the ceiling diaphragm and welded a plate into the ceiling’s edge to tie the roof diaphragm into the wall supports. “We kept the existing exposed structural trusses in the ceiling in place and added unobtrusive bracing that matched the original. Once it was painted, the new bracing seems to disappear into the architecture,” Madsen explains.

Set into a sloped site, the building’s front façade aligns with the street, but the lower level is at grade in the back of the building. The combination of little access to daylight and low ceilings in this partially subterranean level made it an inhospitable space. To create a useable work area and provide more natural light, the team designed a 2,600-square-foot addition in the back, bringing the powerhouse’s footprint to just more than 18,000 square feet. Because the addition is not visible from the main façade, SHPO agreed to its construction.

The team further capitalized on the addition by building a 26-foot wooden deck on its roof which is accessible from the main level. The deck overlooks a waterfront port park and the Bay Bridge beyond.

“The addition made the project viable while maintaining the integrity of the building,” Madsen explains. “The deck connects the main level to the waterfront in a way that wasn’t possible before, and the downstairs area now has a lot of light from the addition’s windows. The quality of light works really well.”

The powerhouse’s mission-tile roof was in good condition, so the team removed the tiles, installed a new waterproofing membrane and replaced the original roof tiles.

The historic façade posed a challenge because the decorative metalwork in the eaves and cornicework had rusted away. The team laboriously rebuilt and re-inserted these artistic pieces, which are critically important to the building’s original appearance.

Although the last corner of Pier 70’s shipyard activities closed in 2017, the powerhouse stands as a reminder of how the maritime industry once was fueled here while simultaneously bringing a spark of new activity to the area.

“This project is the result of many hands and a meeting of the minds,” Madsen asserts. “The team was very creative and really thought outside the box. You have to have that to obtain this kind of success.”