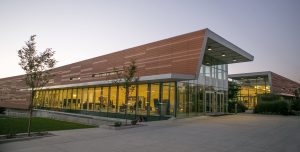 If you walked south from the Kansas River down Vermont Street in Lawrence, Kan., a few years ago, you’d stroll by building after building in its historic district made from concrete and brick. Crossing over 7th Street would have been just like any other intersection in town. You might not have even noticed the Brutalist-style library on the corner, which was built in 1972 and clad in concrete.

Leap forward to present-day and a newly renovated Lawrence Public Library greets passersby. It features NBK Architectural Terracotta in a natural color tone that blends with the surrounding historic buildings, yet simultaneously stands out as a beacon of modernity and future growth.

“When I’m walking back from downtown, I still can’t believe this building is sitting here. It’s gorgeous,” says the executive director of the library, Brad Allen. “There’s a significance to having public works projects. You have to walk a fine line with Midwesterners to avoid being too ostentatious. This building has the right amount of bold while still remaining practical.”

The $19 million renovation and expansion of the library and an adjacent parking structure took 17 months to complete; however, the process began over a decade ago with public discussions between the community and local officials. Once the bond for a new library was issued, architectural and planning firm Gould Evans, whose local office is just a block from the library, helped organize public outreach to determine which features the community wanted in its newly designed library. B.A. Green Construction served as the general contractor of the project helping to bring those designs and ideas to life alongside the team at Gould Evans and officials with the City of Lawrence. 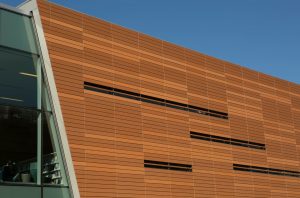 The $19 million renovation and expansion of the library and an adjacent parking structure took 17 months to complete.

“Lawrence is a progressive community, and they recognized that the building should set an example for environmental sustainability, particularly energy efficiency,” says Sean Zaudke, associate principal at Gould Evans. “We responded by designing the façade to blend into the historic downtown context and simultaneously control thermal transfer.”

The original concrete building design fell short of modern standards for sustainability, energy efficiency and daylighting. The teams used energy modeling to determine how daylight could play a factor in increasing efficiency properties. As a result of the energy modeling and façade integration, the facility maintained energy costs almost entirely unchanged, but in a building that is 50 percent larger.

Ultimately, Gould Evans used public input to design an expansion that created an additional 20,000-square-feet of space with a single, continuous pathway for reading, meeting spaces, and other library services. Because NBK Architectural Terracotta is manufactured with modularity in mind, Gould Evans was able to integrate voids throughout the façade with alternating large and small windows along various sides of the building.

“Rather than adding to one side, the addition wraps the entire existing building. The terracotta essentially created a thermal envelope, increasing the R-Value of the perimeter wall, which gave us the opportunity to upgrade glazing systems and to integrate daylighting solutions within the façade,” said Zaudke, elaborating on the façade benefits.

From afar, the terracotta panels themselves appear to be several different shades, an intentional feature to avoid a monolithic appearance. In actuality, however, all panels are the same color. The key differences are uncovered in the textures and grooves of each panel, offering a dynamic appearance. Because sunlight hits the building at different angles from season to season, the building appears to change with the seasons, a different color surfacing in the winter and another in the summer.

In addition to the energy efficiency benefits, NBK Architectural Terracotta, a natural material made from recycled content, has sustainability characteristics that put it above other cladding options. The terracotta panels, available in a spectrum of various shades and colors, will never fade in the same way that a painted or coated product will over time, nor will it experience any unwanted environmental issues like paint run-off. It’s no wonder that terracotta has been used in buildings across the world for thousands of years, with many of those same buildings having original facades that have lasted for centuries without needing replacement.

As a result of energy modeling and façade integration, the facility energy costs almost entirely unchanged, but in a building that is 50 percent larger.

Since re-opening, the Lawrence Public Library has seen an increase in visitors with nearly 750,000 patrons in the first year, compared to less than half a million in years prior. The building, which recently received LEED Gold certification, will continue to offer programs for all ages and a unique setting for community discussions within Lawrence.

“In a world where the ability to consume information has become so overwhelming, libraries will need to be able to adapt to their local community’s needs for information, gathering space, and conversations centered around how to transform the future of the area,” says Allen when asked about the role of libraries moving forward in the digital age. “The building has to be a space for the future.”

Carbon Taxes: A Viable Alternative to the Emissions Caps?