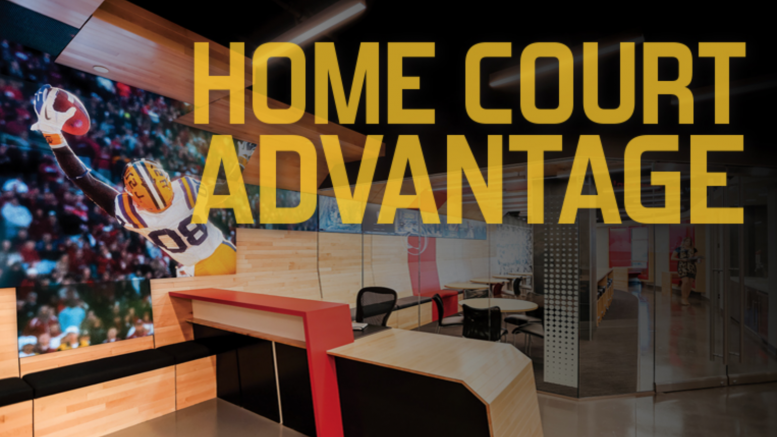 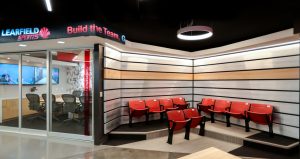 The renovation project at Learfield marries the exciting atmosphere of a stadium or arena with an everyday business office.

For more than four decades, Learfield has been a familiar name in the world of college athletics. In 1975, Learfield became the radio rights distributor for the University of Missouri Tigers, which was the starting point for its multimedia sports marketing focus of today.

Headquartered in the Dallas suburb of Plano, Texas, Learfield has roughly 130 offices across the country at the collegiate institutions, conferences and arenas the company has the privilege of representing. Whether it’s Mustangs, Sooners, Tar Heels, Tigers or Wildcats, chances are, Learfield is involved.

Although Learfield has evolved over the years from a traditional broadcasting business to a broader media content creator, its work is still centered around a passion for college sports. Because of the company’s growth, maintaining brand consistency has been an essential goal. In addition, Learfield’s executives sought a design partner for their facilities that understands the evolution of technology.

St. Louis-based V Three Studios LLC, a full-service architectural firm with an emphasis on designing media and communications facilities across the country, has partnered with Learfield since the mid-2000s. V Three Studios has worked with Learfield in seven states and has used a consistent material palette and architectural vision throughout all Learfield’s facilities. The design firm has had the privilege of developing Learfield’s offices into functional spaces that convey a “sportscentric” theme throughout. 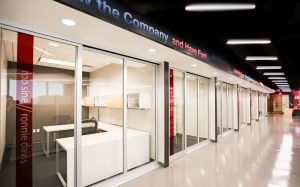 The first sports-themed renovation occurred in 2004 at Learfield’s technical office center in Jefferson City, Mo. The changes connected the employees back to the universities they represent and immersed them in the product they were selling.

“We’ve had a long-standing relationship with V Three, because they understand our identity and passion for college sports,” states Matt Lear, project manager at Learfield. “Continuing to work with V Three ensures consistency throughout all of our locations around the country.” 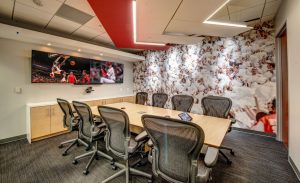 In 2017, Learfield executives recognized the company’s suites at the Park Center Building in Plano were not meeting the demands of today’s media technology. The space was unable to provide collaborative idea-driving environments for Learfield’s innovative staff. Learfield executives decided it was time to renovate and reached out to V Three Studios for help retrofitting the space into an inspirational environment.

“When considering renovations to our space, we didn’t want to look like we work in your typical office building,” Lear claims. “We wanted to marry the excitement of a stadium’s or arena’s atmosphere with a day-to-day business office, and V Three has been able to capture that with these renovations.”

After considering the projected future of the company, creating a collaborative space for Learfield’s internal teams became a top goal of the project. It was essential that marketing, sales and content development teams were able to work side by side to best serve the firm’s more than 100 collegiate clients.

No longer working in silos, ad hoc teams can quickly form with experts in graphic design, research, marketing and digital to produce a high-quality package that will meet a client’s needs. This allows everyone to utilize his or her strengths to produce a package in a timely manner.

By using fewer walls and specifying glass where acoustical separation was needed, V Three Studios was able to create the desired open environment. The design team also minimized private office spaces, which broke up any company divisions and allowed employees to become more connected, ultimately saving time and money for the company. Smoother and faster collaboration is crucial to a company like Learfield as the media world transitions from analog to more digital.

“We needed a space that was more collaborative and flexible,” Lear states. “We want our employees to be able to work as small teams, so we needed functional pods where people who worked on different teams could tackle projects together.” 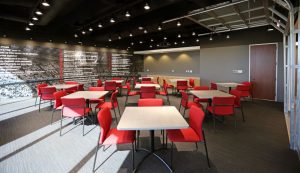 V Three Studios worked with Learfield to create an Ideation Suite, which serves as an environment in which interdisciplinary groups can work together on collective ideas, or smaller groups can perform problem-solving exercises. Known as the “X’s and O’s Room” by the staff, the space is highly flexible in terms of furniture and technology. The large, well-designed room easily adapts to the various demands of the suite and can be adjusted to serve multiple purposes. For example, the suite is capable of hosting board meetings and catered events while also serving as a classroom with a white board, projection systems and seating that can be arranged in a theater style for lectures.
Photos: Christopher Mann, Mann Photography

Kurt Kerns is principal and founder of St. Louis-based V Three Studios LLC. As a registered architect in more than a dozen states, Kerns has worked on projects across the country for clients, including Boeing, CBS and Learfield.