The Southeast Energy Efficiency Alliance (SEEA) is pleased to announce the findings of its second Energy Pro3 Report, titled “The Economic Impact of Energy Efficiency Investments in the Southeast”. This independent analysis, conducted by the Cadmus Group, evaluated the economic performance of SEEA’s 16-city, DOE-funded energy efficiency retrofit consortium from 2010 to 2013 and found that every million dollars in vested in energy-efficiency programs in the region generated $3.87M in economic output, together with 17.28 new jobs.

“The remarkably positive economic impact that investments in energy efficiency have had on both economic growth and job creation in the Southeast are helping to create a fundamental change in perspective,” says SEEA President Mandy Mahoney “While this region has traditionally lagged the rest of the country in energy innovations, the results of this ‘grand experiment’ in community-based energy efficiency programming have validated the powerhouse economic effect of energy efficiency, a vitally important tool to ensuring the prosperity of the Southeast.”

The report’s findings are based on a region- and state-level analysis conducted by the Cadmus Group using Impact Analysis for Planning (IMPLAN) v3.1 economic modeling software. IMPLAN compared the effects of program-related spending (DOE’s investment of $20.2M in the Southeast) on the economy to a hypothetical baseline in which these energy-efficiency programs would not have existed. It then calculated the net impacts of SEEA’s energy efficiency programs on the economy of the Southeast and on the economies of states with participating programs.

While program investment levels varied by states, all states with participating programs saw strong positive results as seen in the figure below, with top-performing states benefiting at higher levels due to several factors including local program administration and spending; the availability of financing for retrofits; consumer education efforts; the presence of strong marketing support, utility partnerships, and workforce training and development; local market conditions; and in most cases, existing market momentum. A detailed review of these factors can be found in SEEA’s first Energy Pro3 Report. 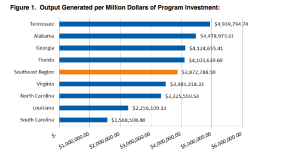 In addition to achieving positive economic impacts from DOE’s investment in the region, throughout 2013, the Southeast also made significant progress in advancing energy efficiency policy. This included the pass age of new, mandatory energy efficiency rules by the Mississippi legislature which also adopted the ASHRAE 90.1-2010 Commercial & Public Facilities Building Code, and the naming of Mississippi as a “most improved state” by the American Council for an Energy Efficient Economy (ACEEE) in its annual 2013 State Energy Efficiency Scorecard, published in November 2013.

“SEEA’s unique analytical approach has yielded valuable insights into how investments in energy efficiency and conservation can also create jobs and other tangible benefits, even in regions that have historically shown little commitment to energy efficiency,” says Hossein Haeri, Ph.D., senior vice president in charge of Cadmus’ energy services. “In our experience conducting assessments of energy-efficiency programs nationwide, analyzing the economic impacts specifically associated with BBNPs as SEEA has done is promising new territory. We hope that SEEA’s example will provide a model for similar programs.”

To date, SEEA’s Energy Pro3 initiative includes two seminal reports, Progress, Productivity, Prosperity for the Southeast and The Economic Impact of Energy Efficiency Investments in the Southeast. The first report, published in November 2013, presents the SEEA Consortium program’s range of results and lessons that hold major implications for the future of energy efficiency and related regional programming. These areas of focus–detailed in the report–include program administration, financing, marketing and consumer education, workforce development and utility partnerships.

Navien Partners with Habitat for Humanity to Build Homes