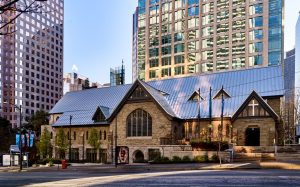 Completion of the reroof project at the Christ Church Cathedral in Vancouver, British Columbia, marks the culmination of a four-phase, 22-year renovation plan.

Completion of the reroof project at the historic Christ Church Cathedral in Vancouver, British Columbia, Canada, marks the culmination of a four-phase, 22-year renovation plan. The cathedral—built originally in 1894—was the first church in Vancouver and began with a cedar shake roof. Over the years, various additions and modifications were undertaken but none contributed to the long-term sustainability of the historic structure.

In 1995, a formal plan was undertaken to make the cathedral structurally sound and to meet seismic stabilization requirements. Aesthetic and acoustical upgrades, along with basic functional improvements, were also included in the multi-phase plan.

The final stage of the renovation, replacement of the roof, became somewhat of a marvel in Vancouver. The entire building was enclosed in a scaffold with a tarpaulin covering the structure to protect the church from the weather as the existing roof was removed. The scaffolding reached 100-feet high in order to allow use of a traveling gantry crane for moving materials to all areas of the roof.

Approximately 12,000 square feet of prePATINA blue-grey RHEINZINK was installed using a traditional batten seam profile. Installation of the panels was done by TEK Roofing, Vancouver. “I’m an old school guy and everything we do is traditional,” says TEK President Terry Kellogg. “The RHEINZINK panels are all hand formed. No machines were involved other than our breaks. The traditional method is just more exact in terms of the details because you are fabricating every single piece.”

The TEK crew ranged from 10 to 20 individuals depending on the work being done. Kellogg worked alongside his crew for much of the job. “I spent nearly two months on the tools working with the boys,” Kellogg says. “It was quite enjoyable.” TEK Roofing specializes in the fabrication and installation of natural metals.

Removal of the existing roof required workers to be in full HazMat gear as the artificial slate material was bonded with asbestos. The felt layers contained asbestos as well and plywood layers underneath were contaminated by lead dust.

A major issue that had to be resolved before the zinc roof could be installed was getting a level and true substrate. Over the years since it was originally built, the structure had settled and shifted considerably. And construction methods more than a century ago were not nearly as exact as today. “We were surprised at how bad the structure was when we opened the building up,” says Ian Birtwell, a parishioner and volunteer project manager who functioned as liaison with the church. “The connections to walls were poor, basically gravity connections. That’s the way they built in those days. And the roof ridgeline dipped 6 inches. We used a laser system to create a computerized 3D model that revealed the high spots and low spots so that we could get a totally flat roof.”

Installer Terry Kellogg gave credit to another company that was involved in leveling the structure. “PBEM based out of Vancouver did a lot of the framing, working under the supervision of our superintendent. PBEM was instrumental in getting us a level roof. They added a huge amount of structural steel. We couldn’t have done it without them,” Kellogg says.

Architectural design for the project was provided by Proscenium Architecture & Interiors, Vancouver. Renovation of the historic building was deemed a Heritage project and had to meet certain guidelines for approval. “Good Heritage practice requires that the renovation be respectful of original materials,” according to Proscenium Principal Hugh Cochlin. “Slate was initially suggested by several interested parties but its weight was problematic for the seismic upgrade. We gravitated to zinc early in the process. We wanted a material that would last. We expect to get 100 years or more from the RHEINZINK. Plus it looks contemporary but is respectful of good Heritage practice. The Heritage Commission approved our use of it.”

Kellogg concurs regarding the lifespan of the zinc. “With the pitch of the roof, it’s likely a 100 year roof,” he says.

The prePATINA blue-grey color was also another reason for selecting RHEINZINK. “Everyone likes the way the blue-grey RHEINZINK complements the natural stone on the building,” Cochlin says. 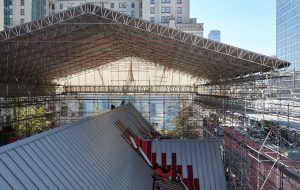 The cathedral was enclosed in a scaffold with a tarpaulin covering the structure to protect the church from the weather as the existing roof was removed.

Another attribute of zinc that influenced its selection for the project is its ability to repel moss. “The cathedral is in somewhat of a concrete canyon with high-rises all around and thus gets very little sun,” Birtwell says. “The previous roof was really moss-covered. We sometimes joked that the moss was the only thing holding the old building together.”

The detailing on the job was complex with multiple interfacing. “We had complicated transitions,” Kellogg says. “There was no caulking, no screws — all traditional methods. There were several pitch changes and elevation changes that made the installation time-intensive. It was a labor of love.”

According to architect Hugh Cochlin, all of the details were drawn by hand. “That’s old school,” Cochlin says, “but appropriate for a Heritage project. We worked closely with TEK Roofing and had many on-site meetings. There was more collaboration with the installer than is the norm today.”

Another major aspect of the final-phase renovation was the addition of a bell spire set atop the existing elevator core. The open glass and steel structure housing four custom-cast bronze bells was the last architectural addition to the project. The bells were cast in France and the bell spire glass features a design by Canadian artist Sarah Hall.

The bells ring at the beginning and end of the workday, on Sundays, for weddings and funerals and to mark special celebrations in the civic, interfaith and multicultural community of Vancouver. “Completion of the project protects the heritage of this historic church and the bells proclaim the compassion and peace that this place represents,” says Peter Elliott, dean and rector of Christ Church Cathedral.

The general contractor on the project was Scott Construction Group, Burnaby, B.C. The RHEINZINK distributor was Alesther Metals in Burnaby.

Office Building Is Transformed After Lobby Renovation and Amenity Upgrades