The Burlington Coat Factory is known for offering shoppers affordable outerwear that keeps them warm, dry and protected from the elements. It seems only logical the store would likewise want a roof known for its protection against the elements. That’s why Sweet Properties, Modesto, Calif., chose to replace the 120,000-square-foot roof on the Burlington Coat Factory portion of the Briggsmore Shopping Center in Modesto with the same roof system previously in place. And like a beloved hand-me-down coat, the old roof will live on after being recycled.

“We had a 17-year-old Sika system on that roof already and had been extremely pleased with it,” explains Ben Sweet, owner of Sweet Properties. Sweet originally tried using a built-up roof, but multiple leaks and other problems led him to give vinyl membrane roof systems a chance. “There were no problems with the roof we installed in 1992. We thought it was phenomenal to have a roof that big with no problems.”

But damage to the vinyl during an earlier remodeling phase required Sweet to replace the building’s roofing system.

Sweet contracted D7 Roofing, Sacramento, Calif., to install the new roof, and the contracting firm offered an alternative to sending the original roof to the local landfill. 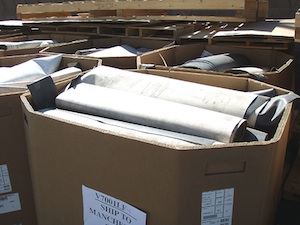 Old roofing material was boxed up for transport to a recycling center.

“When they suggested the roof membrane be recycled, we were in favor of that,” Sweet says. “Especially since there would be no additional costs to us. Turns out the cost of hauling the material to the manufacturer facility to be recycled is about the same as the cost of putting it in a landfill.”

Vinyl is an excellent candidate for recycling because the old roofing material is easily introduced into the raw material base for the manufacturing of new roofing membranes and accessories.

During removal, D7 Roofing cut the existing membrane into 30-inch strips that fit into dedicated container boxes. Coordinating the shipping of the old membrane to the recycling center required a little more work on the contractor’s part, but the crew believed it was well worth it.

Installation of the new roof was fairly straightforward because the insulation and decking did not have to be replaced or repaired. However, the installation did involve temporary water tie-offs, which required welding the newly installed membrane to the surface of an existing membrane — a necessary step because the building was a functioning retail store dur- ing the installation.

“One thing you have to realize is that when you put a roof of that magnitude on an operational retail establishment, there is a lot of coordination involved with the store management to minimize any inconveniences to the store and its customers,” Sweet notes. “Fortunately, the product and crew kept any disruptions to a minimum. It was a whole lot less intrusive than if we had been installing a built-up roof.”

BIPV Report About Next Eight Years Is Available

Be the first to comment on "Reroof. Reuse. Recycle."