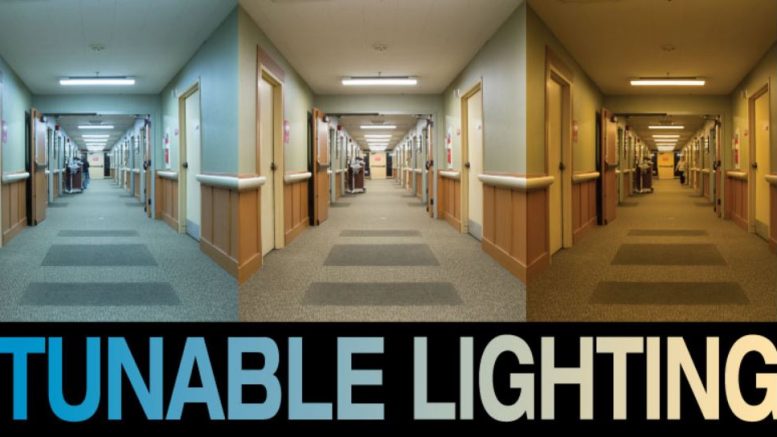 Tunable lighting allows for electric lighting to provide a similar cue to the time of day as the sun in indoor environments where there is often a lack of access to daylight for many occupants.

The renewed focus on human health in the built environment is leading building owners and occupants to request healthier working, learning and living spaces. In architectural lighting, the increasing demand for healthier buildings has aligned with advances in LED technology, controls and research exploring human biological response to light. This alignment has led to a rise in health claims related to lighting, yet there is still much to learn regarding the relationship between light and human biology.

The first published research documenting the treatment of a patient with winter depression using light occurred in 1980. The article, “Light Suppresses Melatonin Secretion in Humans”, was published by the National Center for Biotechnology Information (NCBI), Bethesda, Md. It was not until 2002 that research was published identifying a new photoreceptor responsible for regulating the human biological clock. The article, “Phototransduction by Retinal Ganglion Cells That Set the Circadian Clock”, also was published by NCBI. Much of the research related to light and human biology has been completed in very controlled environments, which presents a challenge when trying to apply scientific data to the built environment where an unending supply of variables are present.

When designing an architectural lighting system to account for possible health benefits, there are many considerations to take into account, such as which metric to use, how and where to measure the light, and the multiple factors that affect circadian response to light. These factors include timing, duration of exposure, the wavelengths of the light (known as the spectral power distribution, or SPD), intensity (amount of light) and physiological dynamics. Tunable lighting allows for the variation of the SPD and intensity, so it is increasingly chosen to address some of the factors that affect the human biological response to light. Tunable lighting also increasingly is considered as costs decline and the number of products to choose from rises.

There is clear interest in tunable lighting technology for biological benefits, as well as other reasons, including curiosity. Over the past several years there has been an observable growth in the number of products available, the number of manufacturers developing products and the number of installations. The Washington, D.C.-based U.S. Department of Energy’s Solid-State Lighting Program (SSL) continues to evaluate tunable lighting technology, from the testing of products in a laboratory to evaluations of performance in the field with the goal of increasing the understanding of the limitations and benefits associated with this technology. (Read “Report 23: Photometric Testing of White Tunable LED Luminaires”.)

Another recent evaluation was of a tunable lighting system installed in three K-12 classrooms near Dallas. (The report can be found at here.) The incumbent fluorescent troffers were replaced with white-tunable LED troffers with the goal of learning about the benefits of this new technology in addition to energy savings. In both projects, benefits beyond biology were realized, which are explained in greater detail in the sections that follow.

Hospital patients, residents in senior care facilities, as well as other building occupants who spend a significant portion of the day inside with limited access to daylight may lose track of the time of day, particularly in populations that are restricted from leaving a building. Tunable lighting allows for electric lighting to provide a similar cue to the time of day as the sun in indoor environments where there is often a lack of access to daylight for many occupants.

The tunable lighting system in the BHU was designed to establish a sense of time by creating a marker of the routine passage of the day/night cycle with a consistent, warm sunrise, a brightening and cooling of light throughout the early morning, peaking by noon, and a sunset in the evening. This effect was achieved by delivering light lower in intensity and correlated color temperature (CCT) during the night with light increasing in both CCT and intensity throughout the morning and then decreasing again in the late-afternoon and evening hours, returning to night settings. This pattern established by the architect was intended to support a connection to nature, as well as a biological response to help prepare the patients for bedtime. One BHU nurse commented a year after the white-tunable lighting installation that she thought the residents in the BHU went to bed earlier than in a similar facility where she also worked that did not have tunable lighting. Although the bedtime of patients was not tracked for this project, this is a potential benefit worth considering and tracking in future projects.

In the K-12 classroom evaluation, one of the teachers used the ability to lower the intensity of the lighting and switch to a lower CCT as a signal to her elementary students after recess that it was time to transition back to activities in the classroom. Another teacher lowered the intensity of the lights when he had a migraine and when his middle-school students arrived to his classroom some assumed that he had a migraine because of the dimmed lights.