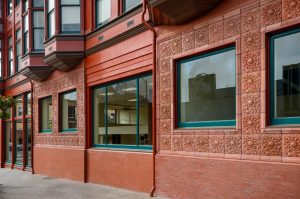 A few critical hurdles threatened the project’s progress. Sourcing appropriate materials to meet the Standards’ definition of “in-kind” or “compatible” replacement was difficult. For example, it was initially considered infeasible to source replacement glass panels needed for the storefront’s large-format glazing—up to 75 or 80 square feet each. Many large glass supply companies wouldn’t deliver because their trucks were unable to navigate the narrow, winding mountain roads leading to Eureka. Ultimately, the team found a way to fetch the monolithic panels from nearby Santa Rosa, Calif., on smaller trucks, with the inevitable loss of some sheets during transport. The solution was critical to not only the owner group but also for meeting the historic-preservation standards underlying the tax breaks.

Although Eureka has always had a healthy supply of skilled woodworkers, early on in the project it became clear that the region lacked certain trades that specialized in historic-preservation work. Additionally, few of the contractors had worked on a project that required meeting the Standards. In an unusual instance of project team collaboration, Page & Turnbull led a training effort so the subcontractors not versed in historic-preservation requirements could understand the importance of accurately restoring features to meet the Standards, the key to securing the tax credit and its contribution as a significant source of funding.

As for the long-lost turret, it had to be totally reconstructed to match early photos and original plans. Carpenters framed the semicircular addition using a full-sized template with local craftsmen reinventing the curved trim and tall wood windows.

In fact, underlying the renewed Carson Block Building is a massive structural retrofit with a completely reworked framing system. New seismic bracing at the storefront level was a critical addition, but as conceived it would have been visible through the historic (and tall) glass storefront. A redesign moved the bracing back and also added steel bracing within interior spaces, presenting another challenge in keeping the interiors true to their original while incorporating steel framing for earthquake safety. 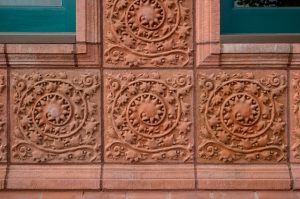 The redwood is treated so it can withstand the harsh marine conditions in Eureka. Building features that had been removed or damaged beyond repair are replaced.

Other safety standards were met or exceeded while reclaiming the full legacy of Eureka’s vaunted past. Now serving as a mixed-use resource that houses ground-level retail, the headquarters for NCIDC, various office tenants, and a co-working and event space in the former theater, the work showed how we can revive long-lost building traditions to benefit communities and cities with improved centers for commerce, tourism, entertainment and retail.

Most of all, the project revealed the nature of Humboldt County. This small, cooperative community displayed dedication to civic engagement. Local economic development committees, city leaders, and local historical societies and arts groups all banded together to secure success for their beloved Carson Block Building. The restoration and renovation processes brought passersby together, turning strangers into friends sharing wonderment and awe at their region’s real history.

What’s Hot in Architectural Woodwork in 2020

MCA Welcomes Members to Its Executive Committee and Board