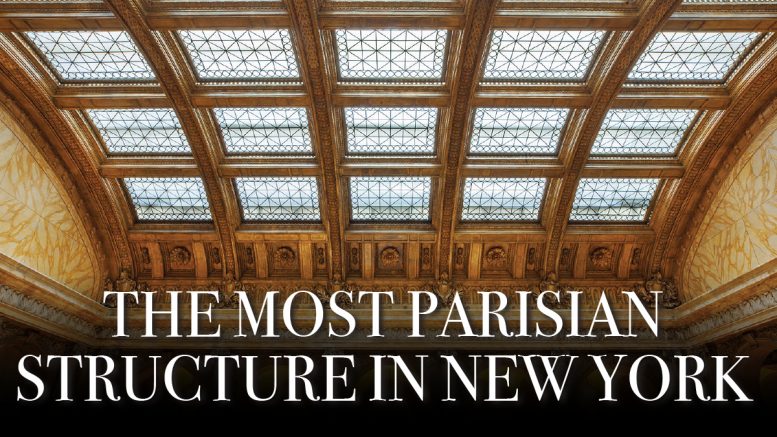 Completed in 1907, the Beaux-Arts Surrogate’s Courthouse encompasses an entire block in downtown Manhattan, bounded by Chambers, Centre, Reade and Elk Streets. The interior and exterior are New York City Landmarks. The building, which was also placed on the National Register of Historic Places in 1972 and designated a National Historic Landmark in 1977, holds the city’s municipal archives and features ornate courtrooms for New York County’s Surrogate’s Court on the fifth floor.

John R. Thomas, one of the United States’ most sought-after architects of public edifices in his day, designed the 7-story building. Thomas considered this building his masterpiece. The opulent 3-story atrium features a 40- by 60-foot skylight that soars overhead, allowing natural light to flood in, illuminating the rich and highly articulated interiors. The Paris Opera purportedly inspired the skylight and, in fact, when the court building was completed it was called the most Parisian structure in New York.

A SKYLIGHT TO BEHOLD

When it was built, this atrium was the grandest, most expensive and most controversial—because of its cost and opulence—part of the building. The monumental atrium space features an extraordinary double staircase of Tuscan marble imported from Siena, which leads to upper-level balconies. The walls and columns are lined with matching Siena marble with blood-red marble roundels and elaborate carvings that include garlands of fruit and foliage. Mosaic murals by William DeLeftwich Dodge feature the signs of the zodiac. For the floor, the original architect chose pink marble from Tennessee and blue marble from Belgium, laid out in geometric patterns.

Although many of the courtyard’s sumptuous finishes were imported from Europe, the original skylight was fabricated just a couple dozen blocks north of the building itself, in Chelsea.

The original skylight monitor actually consisted of two separate glazed assemblies with an interstitial space. The outer assembly faced the sky and provided protection from the weather. The interior glass layer, or laylight, was seen by the public from within the atrium and was, therefore, treated in a highly ornamental fashion. In addition to its visual function, the laylight provided code-required occupant protection from potentially falling glass. The monitor that projected from the roof was gable-shaped with glass panels originally supported by a copper frame structure with a ridge at its peak. Ten clerestory windows on the vertical sides where the skylight drops to a walkway stretched around its perimeter. The walkway extended along the built-in gutters at two sides and consisted of hexagonal glass block set within cast-iron panels. The laylight within the atrium was comprised of hundreds of translucent glass panels set in an ornamental bronze clad cast-iron frame forming a monumental barrel vault.

Although the skylight first began to leak in the 1990s, rehabilitation was postponed because of the near constant use of the building. In addition to its municipal use, the building hosts major public and private events and is rented out as a film set. By the time the phased restoration had begun in November 2016 the atrium’s grandeur was diminished by the damaged and grimy skylight. There also was extensive damage to adjacent materials, including marble and plaster.

Urbahn Architects worked with Jablonski Building Conservation Inc., the New York City Department of Design and Construction, and New York City Department of Citywide Administrative Services to develop a scope of work and procedures to repair and restore the historic elements on the interior and at the skylight level. The project involved a great deal of onsite research because there were no original drawings. Prior to any work beginning, Urbahn Architects’ team surveyed and documented the existing conditions, including the exterior skylight monitor, leaded-glass laylight panels, the bronze-clad barrel-vaulted frame and the plaster lunettes. The design team conducted its survey from a lift so materials could be inspected up-close. The design team also surveyed the skylight’s elements from within the interstitial space between the monitor and laylight.

The inspection included documenting each of the glass laylight panels, including the condition of the leading and the glass panes. The top-facing, unfinished side of the bronze was in good condition. However, because the bronze cladding concealed the cast-iron frame, the full extent of corrosion from water infiltration was not evident until the construction phase. During design, Urbahn Architects and Jablonski Building Conservation determined a significant percentage of the glass blocks at the exterior walkway were cracked or missing, thereby requiring casting of replacement blocks and frame to replicate these elements. The plaster substrate of the lunettes had blistered and much of the paint was peeling.

Some of the original steel-frame elements supporting the skylight were corroded or missing because of years of water infiltration and deferred maintenance. Engineering consultant Ysrael A. Seinuk P.C. prepared new drawings based on field measurements and developed a restoration method for the structural aspects of the project.

“We found numerous structural elements that support the skylight had to be replaced or reinforced,” notes Salvatore Paratore, AIA, LEED AP, project manager for the work and a senior associate at Urbahn Architects. “For the temporary roof, erected to protect the interiors during the renovation, we lifted the steel up for installation using a hoist set up on a scaffolding platform above the work area. All of the other materials and equipment were brought up by an internal hoist.”

Mary Jablonski, Jablonski Building Conservation’s principal, also noted that scaffold access revealed multiple unforeseen conditions, including marble spalls, cracks and losses on the cornice. “Many of the marble spalls were due to corrosion of the structural steel, which was assessed and then repaired,” she recalls. “Work on the marble cornice could not be completed until the scaffold was modified to provide a lower work platform below the cornice fascia. Once the work platform was modified, the marble cornice and fascia were vacuumed to remove dust and debris. Then they were cleaned using a latex-based cleaner to minimize the amount of water used. Cracks and spalls were then identified and repairs were made using tinted epoxy and the dutchman method.”

The construction team was operating in a tight space within a historic structure, so logistics were carefully planned. First, crews erected barricades within the atrium to safeguard the public while they installed a working platform resting on scaffolding with a stair access to the skylight from below. The construction team also provided a temporary roof to make the atrium watertight during construction. The temporary roof consisted of steel beams spanning the courtyard with metal deck and waterproof membrane. These components were hoisted over the building’s main roof and assembled in place over the skylight within the courtyard, surrounded on all sides by the court building’s tower. Select skylight components designated for removal were manually disassembled and lowered down within the building from the working platform. The temporary roof was disassembled and removed by crane from the street once the renovation was completed.