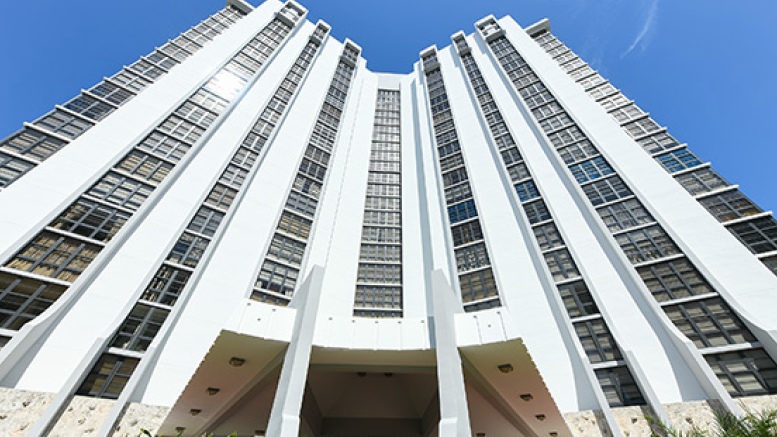 TowerHouse debuted in 1974 as one of Miami Beach’s premier luxury condominiums. Situated on the Intracoastal Waterway with views of the city and bay and boasting sprawling residences of more than 3,000 square feet, this striking building was immediately a coveted address.

However, time and water infiltration eventually took their toll. The once-grand building was looking a little rough around the edges. “It had faced water intrusion problems for the life-span of the building,” says TowerHouse Owner’s Rep Lenny Loscalzo. “They’d been doing patching as they went.”

In 2018, a massive restoration project sought to replace existing stucco on most of the exterior walls, which had become delaminated due to water infiltration. Additionally, major structural and waterproofing deficiencies at the intersection of the original concrete slab and concrete masonry block exterior walls needed to be corrected. In 2011, when the building needed to be painted, the association had used StoColor Lotusan coating because of its longevity and self-cleaning Lotus-Effect technology. When it came time for this restoration, the homeowners’ association turned to Sto again.

But this project needed much more than just paint. “There was never any question that we would use Sto products,” explains Loscalzo, “There was water intrusion at every floor. We needed a long-term solution.” After surveying the situation, the project engineer, project management firm and contractor, in consultation with Sto Corp., determined a course of action to correct the significant existing problems and restore the TowerHouse facade. A variety of Sto products would be used in conjunction to create a watertight barrier and restore the facade: Sto Watertight Coat with Mesh, Sto Wall Leveler and Patch, Sto RFP with embedded Sto Mesh (Sto Crack Defense) and StoColor Lotusan coating.

The first step was to create a waterproof base coat at the intersection of the slab and CMU walls. This was accomplished with Sto Watertight Coat embedded with Mesh. Once that was done, Sto Wall Leveler and Patch was used to build out the exterior walls and establish a stable base. Next, Powerwall Stucco was applied over the Wall Leveler and Patch. To ensure a uniform facade and prevent cracking in the areas that did not require stucco removal, Sto Crack Defense using RFP with embedded Sto Mesh was applied over all the exterior wall surfaces, leaving a smooth, paint-ready finish. The final step involved application of StoPrime, followed by the Sto product that had originally won the TowerHouse Condo Association’s trust years before: StoColor Lotusan Coating in white with gray accents.

The project was completed in 2021 and the association has expressed appreciation of the quality of the Sto materials. “We’ve already faced some severe storms this year,” Loscalzo says. “And there’s been no problems whatsoever. No water intrusions.” After almost 50 years of leaks, it’s fair to say that making TowerHouse watertight is a towering achievement.