The man had a nice house, am I right?

The U.S. is the most powerful nation in the world and, therefore, its government entities must operate within buildings that are functional, durable and of exceptional quality. Many of this nation’s most beautiful and beloved buildings house governmental operations and have been lovingly maintained, restored and expanded to meet changing needs across decades, even centuries. Today, as energy independence and water conservation weigh heavily on the minds of constituents, federal, state and local governments not only are reinforcing structures to ensure the durability of their unique buildings, but also are performing energy- and water-efficiency retrofits to provide leadership in environmental considerations. The following pages highlight renovations of nationwide government facilities that are seeking to ensure optimal building performance for many years to come.

Now 220 years old, the Virginia capitol in Richmond is one of the nation’s most historic and well-known buildings. Originally designed by Thomas Jefferson, who modeled it after an ancient Roman Revival temple, the building has been designated a National Historic Landmark and has often been referred to as Jefferson’s “temple on the hill,” referring to its striking location on the city’s Shockoe Hill. Given its historic status, it’s hard to believe that anything new can be discovered about it. Yet a team of architects and contractors made several important discoveries during a recent multi-year restoration of the iconic building. 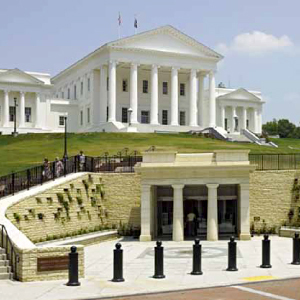 For instance, it had long been thought the building was stripped down to the bricks during an extensive expansion and renovation that occurred a century ago. Instead, careful examination revealed a significant amount of 18th-century millwork still existed. “When we removed a dentil from the rotunda, we found that it was held together with cut nails—18th-century nails—and the millwork had stayed in place for 200 years,” says George Skarmeas, AIA, AICP, a principal and the director of preservation architecture for RMJM, Philadelphia.

“We found quite a bit of original fabric in the Jeffersonian section.”

The project, which began in 2001 and was completed in 2007, entailed a thorough renovation and restoration of the building, including construction of a new underground extension that serves as a visitor center and preserved the above-ground vista of  Jefferson’s temple. In addition to restoring decorative finishes, the architect and contractors installed new heating and cooling systems and mitigated water leakage and moisture. Skarmeas led the design effort as the longtime head of the preservation studio of Hillier Architecture, which has since been acquired by RMJM. The architects worked closely with a joint contractor partnership formed between Gilbane Inc., Providence, R.I., and the Christman Co., Lansing, Mich. For Skarmeas, approaching such a historic building required the exactitude and patience of a surgeon.

“You want to think about it the way a physician approaches a patient,” he says. “You want to spend some time and look at the building carefully, and the building will give you a lot of clues and a lot of answers.”