“Not only would putting the underground extension on the south side solve most of these issues, it would allow people to experience the temple on the hill as Jefferson had envisioned”
-George Skarmeas, director of preservation architecture, RMJM

As an ardent student of the classical architectural vocabulary he found in Europe,  Jefferson modeled the Virginia Capitol after the Maison Carrée in France, an ancient Roman Revival structure. The monumental south façade, for example, features a classic pediment and eight-columned portico. Between 1904 and 1909, a substantial renovation added two identical wings to either side of the Jeffersonian building to house the Virginia house and senate. In the 1960s, the building was “modernized” with new electrical and HVAC systems.

Across the decades, however, the capitol had suffered from numerous alterations and deterioration, including failing mechanical systems, interior spaces that were divided or covered, and decorative schemes that had been obscured. To correct these problems and update the building, the Virginia government commissioned a full-scale restoration with  new building systems and 21st-century technology, as well as a restoration of the historic landscape. Work included replacing mechanical, plumbing, storm-water and HVAC systems; preventing water penetration into the building; restoring architectural features; repainting and replacing decorative schemes; protecting and restoring artifacts; renovating exterior surfaces; and providing for the 27,000-square-foot visitor-center addition. Skarmeas says he and his colleagues had determined several key factors about the project before work began, which other firms that bid on the project had not: the initial proposed location of the addition on the north façade posed risks to the original building, a central plant in which to unobtrusively place major equipment was necessary, the building would have to be assessed as non-destructively as possible and the team must restore as much historic fabric as it could. The firm also had prescribed clear solutions to these issues. 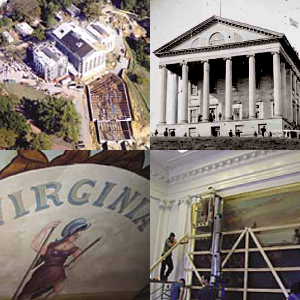 On the exterior, the team found previous layers of coatings had been impervious, trapping moisture behind them and seriously deteriorating the brick. For the restoration, the team removed the entire exterior material and re-clad the brick in a historically compatible coating that had the right mechanical, physical and chemical properties to protect the exterior whose walls were also carefully repaired and repointed. Inside, using mostly noninvasive technology, the team determined the building had limited pathways in which to place new building systems. The team also learned, however, that the floor, made of 1960s-era concrete, was not original, so they replaced it with a raised-access floor that allowed major mechanical systems to be placed in crawlspaces beneath it and historically accurate floor coverings to be installed on top of it. The panelized concrete floor system allows for easy access when needed. Existing vertical channels were exploited wherever possible to connect systems in a loop up to the attic and throughout the building. When new vertical chases were created, the team was extremely careful to protect the thick original walls, reusing historic fireplace flues to channel some system components, for instance.

For example, the team quickly determined that, if the capitol extension were located on the north side, it would require significant, expensive and potentially risky underpinning of the original structure. Not only would putting the underground extension on the south side solve most of these issues, it would allow people to experience the temple on the hill as Jefferson had envisioned, Skarmeas says.
“The raised-access floor allowed us to move horizontally through the space,” says Ronald Staley, FAPT, senior vice president for Christman. “Wherever we did have to do a vertical chase, we didn’t disrupt any more of the wall than we had to.”

Quaker Windows & Doors Products Can Be Found on HistoricPreservation.com