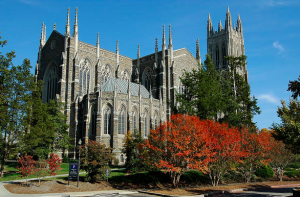 For those of us involved in the business of facilities management, it can at times seem overwhelming and never-ending. In my 21st year in facilities management at two great higher-ed institutions—currently at Duke University, Durham, N.C.—I often say, “You can pick up one rock [rock=problem] and there are 10 more under that one”. This simply means there is lots to do, lots to stay ahead of and lots to keep your eyes on.

Because of this, most facilities managers are good at adapting and getting a few more years of useful life out of a component. But in today’s ever-changing times, simply adapting is not enough. Facilities organizations or certain areas within them may need to be retrofitted; in other words, they may need to be added to or changed at an organizational or structural level to ensure they are set up to support the mission of the institution they are servicing now and into the foreseeable future.

For perhaps the first time, an economic downturn hit higher education with serious impacts. Higher ed had seemingly been insulated from many previous economic downturns because of its uniqueness in financial structure and budgeting. However, with the 2008 downturn, higher-ed capital and operating budgets were reduced and, in most cases, have not bounced back to pre-downturn levels. The new normal is to change and adapt with less resources. Keep in mind, though, higher-ed institutions, like private industry, are not slowing down and are always pushing the limits of their missions. These divergent paths are why I am suggesting that simply adapting may not be enough anymore.

At Duke, facilities management has gone back to a blank piece of paper to understand the business, the needs, the resources, the customer and the expectations. In 2008, approximately 20 percent of the grounds budget was reduced. The response to the reduction was more reactive than planned. Given that there was no detailed data about the business because it had simply adapted over decades, the extent of the impacts could not be accurately estimated or communicated. 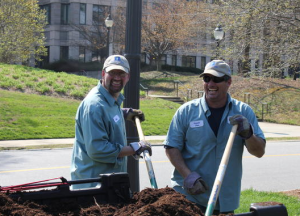 Grounds employees are allowed to request the zone in which they’d like to work, giving them more ownership in the appearance of their zones.

This has led us to a structural reorganization from top to bottom, including personnel, processes and equipment. For example, we switched from a task-oriented model to a geographic zone model in which our employees are allowed to request the zone in which they’d like to work. With the new model, we hope to see our employees take more ownership in the appearance of their zones.

We also quantified all the components across 350 acres of maintained landscape, including turf, lawn and planting beds, as well as identified almost 10,000 trees in defined priority areas, using a combination of aerial mapping and staff on the ground. Knowing the quantities of each component, we assign tasks, such as frequency of mowing or pruning. We know the service level we can deliver and can explain how it was determined to the customer. Senior management understands we must offer different levels of services because of our available resources and has supported the effort. For example, the area in front of Duke Chapel has a higher level of service than a parking lot. Furthermore, we know we can adjust the model to accommodate changes in resource levels, technology or growth and not lose sight of the base business.

As vice president of Facilities Management for Duke University, Durham, N.C., John J. Noonan oversees a staff of nearly 500 who implement the operations and maintenance for campus facilities, grounds and utilities. He also is a retrofit editorial advisor.

Be the first to comment on "Retrofit Facilities Management"