The Utah State Capitol, a nearly 100-year-old, 320,000-square-foot building, was transformed into a seismically base isolated structure able to adjust to 24 inches of multi-directional movement at the perimeter moat expansion joint cover systems.

With building codes becoming more stringent and the public’s desire for seismically resilient buildings increasing, retrofitting aging structures has gained popularity. One thing often left to last when retrofitting a building is the selection of the appropriate expansion joint cover system. Consulting with an experienced expansion joint cover supplier and selecting the right system(s) can go a long way in safeguarding the building and its occupants during and after a seismic event. It is important to carefully consider movement and loading, along with aesthetics, while engaging the assistance of a qualified expansion joint manufacturer. Ensure that you are receiving the most benefit from a seismic retrofit by selecting expansion joint cover systems that will increase structure resilience. 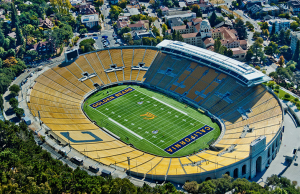 California Memorial Stadium’s owners intended to preserve the structure’s historic facade while performing a complete seismic retrofit to its interior, in anticipation of potential movement from the Hayward Fault on which it is built.

Understanding how to integrate movement into expansion joint coverage is necessary as each retrofit project has unique movement criteria. To ensure top performance during and after a seismic event, appropriate sizing of the building’s expansion joints should be done to accommodate the joint cover assemblies and any accessories (such as fire barrier, insulation or vapor barriers). The type of movement that a structure might experience also needs to be considered. Level of demand will influence the type of expansion joint cover selected, such as a very high day-to-day wind movement.

The California Memorial Stadium at the University of Berkeley, Berkeley, Calif., faced a significant reconstruction challenge. The owners intended to preserve the structure’s historic facade while performing a complete seismic retrofit to its interior, in anticipation of potential movement from the Hayward Fault on which it is built. Multiple expansion joints were added to the seating bowl area, creating several independently moving sections. Some joints, angled to the precast steps, cut across the seating bowl which added to the project’s complexity.

A series of angled joints that followed the profile of the stadium seating was the optimal solution. Each custom joint can account for 12 inches of expansion, compression and lateral movement while preventing holes or gaps from opening during or after a seismic event. This is critical as it allows safe egress for stadium occupants. 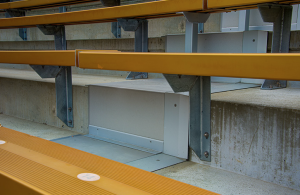 Another area that is often overlooked during the expansion joint selection process is the loading required to be accommodated by the expansion joint cover systems and how this loading will be transferred back to the structure effectively. It is important to understand the types of loading that a cover will see during its service and to communicate this to the manufacturer early in the retrofit process. This allows a cover type to be selected and engineered appropriately for the required loading scenarios. The process also provides opportunities between the manufacturer and the structural engineers to communicate loads to structure and effectively engineer the expansion joint cover connections to properly transfer these loads. 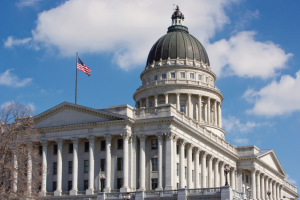 The Utah State Capitol, a nearly 100-year-old, 320,000-square-foot building, was transformed into a seismically base isolated structure able to adjust to 24 inches of multi-directional movement at the perimeter moat expansion joint cover systems.

Utah State Capitol, a nearly 100-year-old, 320,000-square-foot building, underwent a necessary seismic retrofit. It was transformed into a seismically base isolated structure able to adjust to 24 inches of multi-directional movement at the perimeter moat expansion joint cover systems. Project managers closely examined the loading conditions of each moat cover area—for gravity loads and seismic loads—while continually communicating with the expansion joint cover manufacturer’s design team. Covers were designed to adequately carry pedestrian traffic and maintenance equipment, along with the code prescribed seismic loading. The cover systems were tested to ensure they would allow the desired movement. This team approach resulted in effective communication with the design team and confirmed the proper connections were in place on the retrofitted structure to accept the new moat cover systems.

It is possible to find effective solutions that naturally blend with the existing design by working closely with your manufacturer and selecting a qualified installer. This will ensure a quality installation with the desired fit and finish. 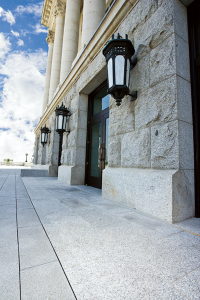 It is possible to find effective solutions that naturally blend with the existing design by working closely with your manufacturer and selecting a qualified installer.

On Oct. 17, 1989, San Francisco experienced a magnitude 6.9 earthquake, causing extensive damage throughout the Bay Area. Afterwards, the de Young Museum needed a covert way to prevent further damage. During a 1993 rebuild, the facility incorporated a base isolation system that could flex up to 42 inches in any horizontal direction. The large seismic joint was hidden on the building’s exterior underneath a copper skin.

Expansion joint covers that bridge the gaps created by seismic retrofits are critical elements that positively affect a structure’s resilience, occupant safety and building aesthetics. Considering movement, loading and aesthetics, in addition to early inclusion of a qualified expansion joint cover manufacturer and installer, will help guarantee the best possible outcome. Providing new buildings and existing structures with enhanced seismic measures greatly increases resiliency and long-term property value. Bestowing your property with the ability to withstand a seismic event is a critical step that’s never too late to consider.

San Francisco Has Mandated Retrofits to Buildings Susceptible to Earthquakes, Taking a Proactive Path to Disaster Mitigation and Recovery

Be the first to comment on "Retrofitting for Increased Seismic Resilience"