The historic River District Tower, a working textile mill for more than a century, is set along the Dan River in downtown Danville, Va.

The city of Danville, Va., established in the 1790s, can trace its history through several industrial eras that have driven its evolving economy. The city first thrived on its agricultural roots and, mostly notably, the production of tobacco and cotton in the region. Beginning in the late 1800s, Danville also became known for its numerous textile mills, a once-prosperous industry that supported the city’s economy for more than a century.

Today, having survived the decline of the tobacco industry and the departure of the textile companies as jobs moved overseas, Danville has successfully diversified its economic base and revitalized much of its downtown district, where several of the old mill buildings still line the Dan River. Among them, the Riverside Mills Mill No. 1 building now serves as a distinctive example of the community’s vision for preserving the local architectural heritage while welcoming new uses for historic structures. The riverfront building has recently been renovated and converted into mixed-use space, including state-of-the-art medical offices, clinics, a restaurant and banquet hall. 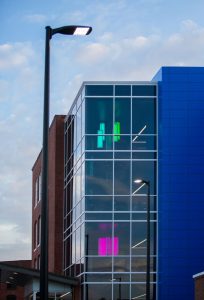 The two-cab elevator rides through the center of the River District Tower and is illuminated by an LED chandelier that changes color throughout the day.

From Tobacco to Textiles

Mill No. 1 was built in 1882, incorporating an old tobacco-picking warehouse or “picker house” constructed in 1828 where farmers once gathered to sell their harvested tobacco. The building is located at the corner of Main and Bridge streets and serves as a prominent landmark in downtown Danville. The 4-story, 13,000-square-foot building was typical of the era: an American-bond brick structure with a “slow-burning” interior wooden structural system, basement, gable parapet, and rows of segmental arch windows to provide light and ventilation. When it opened, local residents gathered on the Main Street bridge to watch as the Dan River, released by the Roanoke Navigation Co.’s canal, began to turn the enormous water wheel that would power the mill in its early days.

During its first year of operation, the mill housed 100 looms and more than 2,000 spindles. By 1886, a machine shop had been added, along with rooms for weaving, carding and spinning. Multiple additions expanded the building to 140,000 square feet through the early part of the 20th century. Mid-century, the building became known as the Dan River Research Building as its use shifted to accommodate experimental technologies and new manufacturing techniques to produce fabric.

Although the textile industry in Danville flourished for many years, employing as many as 14,000 people at one time, the influx of imported textiles eventually caused the area’s mills to close. The Dan River Research Building was abandoned in the late 1990s. 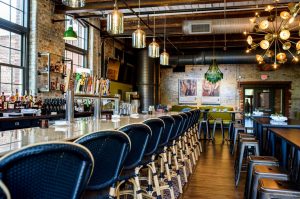 The restaurant and event hall are housed in the oldest portions of the mill building, dating as far back as 1828. Photo courtesy of: Double Tap Media

The building remained vacant for several years, until Mark C. Hermann, M.D., a Danville-based orthopedic surgeon, recognized an opportunity to convert the historic property into mixed-use space. Working with a design team from the Danville office of Dewberry, Dr. Hermann toured the building and envisioned a renewed purpose for the structure with modern health-care space, including extensive facilities for physical rehabilitation and a multi-tiered restaurant overlooking the river.

A Storied Past Brought to Life

During Dewberry’s initial walkthrough of the 140,000-square-foot building, the design team discovered much of the mill’s equipment and materials had been left in place—a room-by-room time capsule of the hard-working textile manufacturing era. In addition to large-scale machines, the designers found colorful fabric samples, patent books, old spools of thread, advertisements, posters and historic photos. They gathered the materials to use as inspiration for the design of the space, including interior paint colors, patterns, shapes and the basic elements of design.

With much of the funding for the building’s rehabilitation coming from state and federal historic tax credits, Dewberry’s team worked closely with the Virginia Department of Historic Resources, Richmond, to comply with stringent guidelines for the restoration. Unimposing additions, including tall glass towers that frame the building’s original exterior texture and serve as distinctive entryways, minimized the impact of the renovation on the surrounding historic district. Most of the building’s interior brick walls were left exposed, as were ceilings and structural elements. 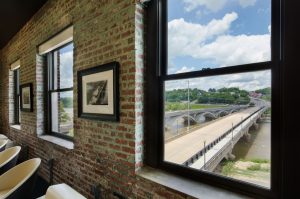 Elements of the original Dan River Research Building are incorporated into the exhibits and features of the conference room, which overlooks the Dan River.

The original maple floors were restored. The fire doors and original structure were also retained, but only a few of the 284 windows were salvageable. Dewberry worked with a window manufacturer to create window casings and mouldings to match the original profiles within 1/16th of an inch.