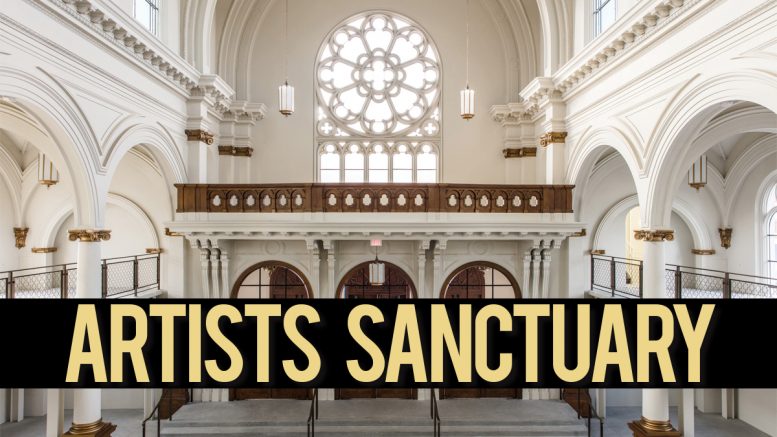 Beloved by locals and visitors alike for its Romanesque Revival-style architecture, with ornate wall finishes and massive twin bell towers on the north side, the historic 1-story church was built in 1913 by architect John J. Foley following the destruction of the previous incarnation in the 1906 earthquake and the fire it sparked. At the time of its construction, St. Joseph’s was one of San Francisco’s most spacious (seating up to 1,000) and magnificent edifices.

History attempted to repeat itself in 1989 when St. Joseph’s was damaged by a major earthquake, after which the church was closed, deconsecrated, and sat mostly vacant and uninhabited for 25 years, during which time the edifice deteriorated significantly. Today, the former church has become a pillar of the SoMa arts scene, thanks to the visionary interior designer Ken Fulk who saw the potential for its rebirth. Fulk, along with co-owners Chris Foley and Doug Ross, assembled a team to redevelop the church—a San Francisco landmark, as well as being listed on the National Register of Historic Places—restoring the architecture to its former glory while completely re-envisioning the interior as a workplace and studio for the arts community St. Joseph’s now serves.

As both architectural designer and preservation architect for the project, Page & Turnbull enjoyed the honor and responsibility of beginning consultation on this unique, $13 million adaptive-reuse challenge in 2005 and carrying through to completion in 2018. At that time, the house of worship reopened its doors as the newly established home and headquarters of the St. Joseph’s Arts Society, a sanctuary and workspace for artists, as well as a place to showcase works for patrons and art lovers.

The project team for the restoration and adaptive reuse of St. Joseph’s worked together to create innovative and robust solutions for a number of unique challenges, including:

The project scope started with a primary goal: Convert St. Joseph’s from a 17,000-square-foot church to a 22,000-square-foot mixed-use office, retail and assembly space, one that could sup- port and help realize Fulk’s vision, which was a reimagined nave as the home of St. Joseph’s Arts Society, a work-study-show- case space for emerging artists. The seismic reinforcement; additions to the interior, such as the freestanding mezzanine; and ADA-compliance work were introduced to support the primary mission. Additional historic-preservation work, including repair and restoration inside and out, was intended to achieve related goals, such as securing an architectural treasure for posterity and aligning the work to be consistent with federal standards for rehabilitation—the latter being essential to securing the tax credits that would make the project financially viable.

Those rehabilitation standards presented significant challenges for Page & Turnbull in the dual role of design architect and preservation architect, as well as for the structural engineer, Sattary Structural Engineering. Strategies for seismic strengthening had to have minimal impact on, and be sensitive to, the spatial characteristics and historic fabric of the church. Ultimately, the solutions would have to stabilize the masonry walls to provide life-safety protection and extend the life span of St. Joseph’s while maintaining the original architectural features and preserving large clerestory windows, rose windows and wall finishes. Page & Turnbull’s architects and conservators conducted detailed analyses and field investigations and determined with Sattary Structural Engineering that the best course would be to incorporate a lateral force-resisting system of braces and supplemental resisting walls to augment the existing steel framing and bolster the strength of the original masonry.

To do this, the design team had to contend with the irregular configuration of a neo-Romanesque church, especially at the north side where large openings for entrance doors, rose windows and clerestory windows penetrate the existing masonry and where discontinuous nave walls present complications. The solution for stabilizing the north facade involved strengthening the two bell towers substantially through the application of supplemental shear walls inside each tower, constructed from reinforced concrete and supported on a shallow mat foundation—designed to match the opening pattern of the exterior walls and maintain the rose windows. Auger-cast concrete piles were added to resist overturning force.

Dynamic analyses conducted for the transept and the south facade considered weight and stiffness while tests determined the projected strength of the archaic masonry construction. Field investigations clarified the composition and construction of these tall walls and located embedded steel elements. Seismic work for this portion integrated concrete shear walls to shore up the transept and strong-back steel framing behind the altar wall. These interventions were care- fully coordinated with removing the interior wythe, minimizing the impact on the interior space and historic finishes.

Ruth Todd, FAIA, is an architect and principal with Page & Turnbull, a firm devoted to bringing together architects, planners, historians, and conservators to build new structures or imbue new life into existing structures by adapting them to meet contemporary needs.