Five years ago, the Chicago Spire was the talk of the town. The 2,000-foot-tall residential tower would crown an urban architectural ensemble that many consider to be the world’s finest, and it would solidify Chicago’s claim to “the tallest building in the Western Hemisphere.” Then came the 2008 economic meltdown, and with it market volatility, controversy and lawsuits. Dreams of the soaring new icon along Chicago’s famed skyline evaporated along with funding. Today, Chicagoans have nothing to show for the Spire but a hole in the ground.

High-profile aborted projects exemplify an economy-induced stagnation of new construction that has gripped the nation since the global recession of 2008. Other U.S. cities have not fared much better than the Windy City. In Portland, Ore., for instance, new construction of commercial facilities has come to a near standstill while non-residential new construction in New York dropped 31 percent in 2011, according to data released by the New York Building Congress.

These data point to a harsh reality: Given the instability of the economy and the exorbitant cost of new construction, a glamorous new facility is not the most prudent option for many organizations.

Adaptive reuse has played a critical role in the evolution of the nation’s most treasured urban areas; consider the historic neighborhoods along the Eastern Seaboard that have evolved not by leveling and rebuilding but by repurposing. Imagine Boston’s Beacon Hill without the historic materials—most notably brick—that distinguish its beloved structures. 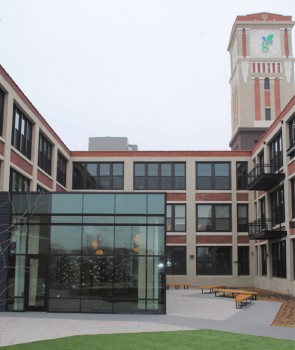 The sustainability argument particularly relates to vast reductions in embodied energy compared to building from scratch: Reusing a building and its structural system reduces energy needed to extract, manufacture and transport materials. Moreover, occupying an existing building already connected to “the grid,” versus building a new facility on a greenfield site reduces costs, saves energy and cuts carbon emissions. Building on a developed site might also reduce traffic congestion and vehicular emissions from employees who would have to drive to a more remote location.

The Green Exchange in Chicago, touted as “the country’s largest sustainable business community,” is housed in a facility first built for the Vassar Swiss Underwear Co. nearly 100 years ago. Today, the center is at 86 percent capacity with businesses, eco organizations, nonprofits, a bank, restaurant and retailers. David Baum of Chicago-based Baum Development says, “The greenest thing about this building is the fact that we didn’t tear it down.” According to Baum, four-fifths of the energy required to build a similar facility goes into the core and shell.

Portland, often hailed as a sustainable trailblazer, has combated its lack of new commercial construction with increased building repurposing and neighborhood rehabilitation. Many of those who have lost their homes are moving into apartment buildings that were once downtown offices. Mike Wells, managing director at Los Angeles based CBRE, says, “We’re seeing more buildings go to market and sell than we’ve seen during the last several years combined.”

NEMA Commends the Release of the Quadrennial Energy Review

Be the first to comment on "Same Place New Face"