Patrick Otellini, director of earthquake safety for San Francisco’s Earthquake Safety Implementation Program, explains by mandating partial seismic retrofits of these buildings, “we’re allowing 60,000 San Franciscans to hopefully be able to shelter in place after an earthquake, which speeds the recovery process. … The mayor really wants to make sure we retain that character of life here in San Francisco.” 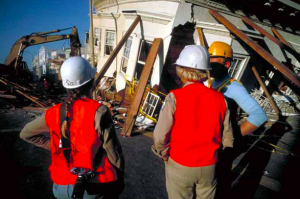 According to analysis, the official estimated cost of seismic retrofits of soft-story buildings is between $60,000 and $130,000 per building in direct construction costs, taking two to four months with construction limited to the ground floor only. PHOTO: San Francisco Earthquake Safety Implementation Program

According to the CAPSS study, the “soft-story” condition exists as a result of large, perimeter wall openings, such as garage doors or large windows, at the ground level. The openings make the ground floor significantly weaker and more flexible than the ones above it so during an earthquake, these “soft” ground-level walls cannot support the heavy mass of the stories above them, which can lead to damage or collapse.

“I would say a ‘soft’—or I rather prefer the term ‘weak’—first-story building, is one in which the first story does not have enough horizontal strength to keep the building more or less plumb during an earthquake,” explains Steven E. Pryor, P.E., S.E., international director of building systems for Simpson Strong-Tie, Pleasanton, Calif. “This can lead to excessive horizontal movement of the stories above the weak story, which then leads to collapse as gravity pulls down on the distorted building.”

Of the more than 4,000 wood structures that were issued notices by the city, not all of them are necessarily within the scope of the program if the structures are not deemed as “soft story” or have already completed a voluntary retrofit. As such, each building will need to undergo an engineer- or architect-completed screening process to determine whether it meets the requirements and into which one of four tiers (see the chart) the building fits.

Otelinni explains: “If you have child care, senior-care facilities, a residential-care facility, an education facility or an assembly occupancy where you have more than 49 people in any given space, the idea would be that those are high-priority buildings. We want to address those first. It’s also the smallest number in the compliance tier, so it’s a good way to ease into this program.”

The compliance tiers also serve to avoid inundating the city’s Building Department with thousands of permits all at once, according to Otellini.

Click to view a larger version of this chart.

For building owners affected by the San Francisco mandate (or others that may follow), there are a number of retrofitting options to help them comply with the new regulations depending on the results of the aforementioned screening process.

Once a building owner has gone through the screening process, an engineer or architect can help determine which of several available options is best for the particular structure(s) in question. Bonowitz notes while the new retrofit requirements may sound like a compliance nightmare, “you’re not making it equivalent to a new building. … You demonstrate to the building department you’ve satisfied the requirements and off you go.”

The retrofitting solutions don’t necessarily have to be that intrusive or costly, either.

“If your owner, your client, says, ‘I want the quickest, cheapest thing to do so I comply with the program and that’s really all I’m interested in doing is complying because I have to,’ you can do that,” Bonowitz explains.