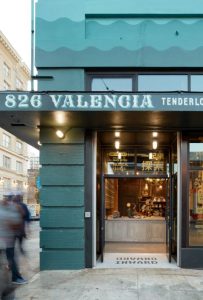 826 Valencia is a non-profit named after its first location, which was established in 2002 in San Francisco’s Mission District. Founded by Educator Nínive Calegari and Author Dave Eggers, 826 Valencia offers writing, publishing and tutoring opportunities for under-resourced students. It is regarded as one of San Francisco’s most notable educational organizations working toward closing the academic achievement gap and igniting a love of learning. Today, with the support of more than 5,000 volunteers in a total of eight centers across the country (Ann Arbor, Mich.; Boston; Chicago; Los Angeles; New York; and Washington, D.C.), 826 Valencia helps more than 30,000 children per year.

In 2015, 826 Valencia sought to open a second location in San Francisco. The Tenderloin, a 50-block neighborhood in the heart of the city, has long been challenged by poverty, homelessness, and crime and was in dire need of safe spaces for youth. Calegari, Eggers and 826 Valencia Executive Director Bita Narzarian also recognized a lack of educational programs in the Tenderloin, specifically for writing.

Along with their lead architect Jonas Kellner, Calegari, Eggers and Narzarian looked at several potential spaces in the neighborhood that were too small or too expensive before locating a 5,000-square-foot ground-floor space for lease in a 2-story brick structure at the corner of Golden Gate Avenue and Leavenworth Street. During its nearly 100-year history, the building had been used as a carriage repair warehouse; film archive; Filipino restaurant; and, finally, a corner store known for criminal activity.

Chosen primarily for its proximity to area housing, schools, and the Tenderloin Boys & Girls Club, the building required extensive tenant improvements—including demolition, abatement of asbestos and lead, and structural upgrades—to create a safe and comfortable environment for children to learn and thrive.

Kellner contacted San Francisco-based BCCI Construction Co. about joining the construction team for the build-out of what would become 826 Valencia Tenderloin Center. “I’ve always wanted to get involved with a project that would really give back to the city that has been so good to BCCI,” says BCCI President and CEO Michael Scribner. “I really believe in what 826 Valencia stands for—the children it serves and the changes they’ve seen in the neighborhoods where they are located.”

Consequently, BCCI donated all its labor and fees to support the new center, making it the largest charitable project that BCCI has been involved with to date. The general contractor also spearheaded an outreach program with the local subcontractor community that proved tremendously successful. Some of the Bay Area’s largest companies, including more than 60 subcontractors, suppliers and designers, came together to collectively devote their time and energy to build out the space and benefit the city’s urban youth.

Cynthia Gage is director of Marketing for BCCI Construction Co., San Francisco, which donated its labor and fees to support 826 Valencia Tenderloin Center. The center is the newest location for a national nonprofit that offers writing, publishing and tutoring opportunities for under-resourced students.

Be the first to comment on "San Francisco Space Inspires, Educates Under-resourced Students"