The slightly canted side walls and suspended ceiling “clouds” not only enhance acoustics, but also conceal the sprinkler lines and accommodate energy-efficient light fixtures. 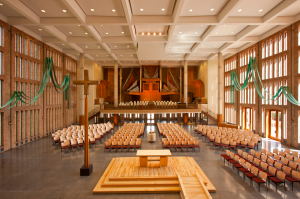 Kodet Architectural Group Ltd. sought to minimize its impact and sensitively maintain the essence of the space’s original design by Ed Sövik.

Kodet Architectural Group Ltd.’s award-winning design of the Westwood Lutheran Church’s sanctuary restoration was showcased during the American Institute of Architects (AIA) annual convention’s Interfaith Forum on Religion, Art and Architecture (IFRAA) presentation and exhibition in Chicago, June 26-28. The project won a 2013 Merit Award in the category of Religious Architecture: Restoration. The church is located in St. Louis Park, Minn. It was originally designed by Edward Sövik and won the 1963 AIA Honor Award.

“We had the pleasure of working with Ed Sövik and sharing our vision for the project. When you have something so good to start, you’re more likely to have good results. We wanted to minimize our impact and sensitively maintain the essence of the space’s design,” says Ed Kodet Jr., FAIA, president of Kodet Architectural Group. “It’s rare to have an opportunity to work with the original architect on a restoration project. The experience took on even greater meaning as Ed passed away this May.” 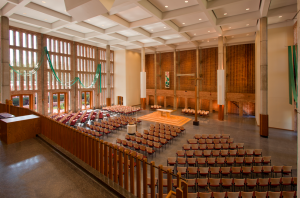 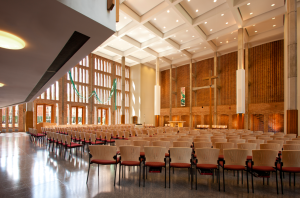 The slightly canted side walls and suspended ceiling “clouds” not only enhance acoustics, but also conceal the sprinkler lines and accommodate energy-efficient light fixtures.

While carefully preserving the light, open feel of Sövik’s design, Kodet Architectural Group’s plan transitioned the church from a traditional, asymmetrical design to a more balanced symmetry, placing the altar at the sanctuary’s center to foster a greater sense of community. The warm, contemporary space seats nearly 600. Allowing for flexibility, the altar platform and furniture can be moved to better suit smaller gatherings and special events.

The AIA Merit Award jurors offered their compliments saying: “This restoration of an Ed Sövik award-winning church revives a mid-century building. The restoration uplifts the space with new lighting, as does the removal of pews, which are replaced with movable seating. The restoration makes an already inspiring, sacred space more functional.”

LED Luminaires Are Versatile and Rugged

Surface Mount Fixture Is an Alternative to Recessed Products