Every once in awhile you get one of those projects where everything just goes right. I was thinking back over my architecture projects that I’ve been involved with during the last few years and some of my fondest memories are of adaptive-reuse projects. There’s something satisfying about taking a building beyond its useful life and giving it new purpose. A few years ago I had one such project that became the crown jewel for a neighborhood in transition.

The former city of Grand Rapids Fire Station No. 12 was originally given life in 1913 and served a southwest-side neighborhood proudly for many years. By the 1970s the station had become a victim of age, and through department consolidations it was rendered obsolete in 1979. The building sat vacant for five years until it was purchased for $1 by a start-up non-profit organization. The Hispanic Center of Western Michigan utilized the building as a community center for the growing population of Hispanic citizens until 1998. By then the building had fallen into a state of disrepair and could no longer meet the needs of the organization until a major rehabilitation could be funded. The Hispanic center mothballed the old station and sought refuge in a nearby facility until its leadership could figure out what do with the icon of the neighborhood. The building sat vacant for seven years before a major capital campaign was launched by several different organizations to bring the Hispanic center back. 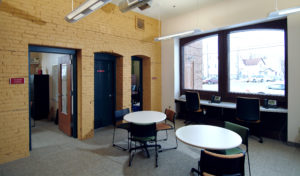 Through a tenacious fundraising effort philanthropic and public-private partnership funds were raised to completely rehabilitate the station into a bright, beautiful, sustainable and energy-efficient space for the Hispanic center. The philanthropic funding also came with a string attached; the project must seek and obtain LEED certification. Our company, as the design and construction team, gladly accepted the challenge and aimed for a high mark, LEED-NC Gold. LEED for New Construction was the chosen certification path for this project because we knew we would be gutting the building to its shell. The opportunity to interject modern methods of energy efficiency into the building and have the ability to achieve the desired energy savings was the key to making the NC versus LEED for Existing Buildings decision.

Taking a building that was originally constructed in 1913 with virtually no thermal envelope and making it a high-performance building is a complicated notion. The concept of a thermal break was not exactly front-of-mind for early 20th century architects and builders. During the design process we found trade-offs sometimes were necessary. We needed to create a thermal envelope. This involved studding out the interior side of the three-wythe brick walls to have space to insulate. Would we have liked to retain all the exposed brick walls? Of course. The rustic brick went well with the Hispanic design motif that we were aiming for, but it didn’t meet the energy requirements we needed to achieve to hit our LEED Gold target. Interior walls that were not part of the thermal envelope were left exposed for their aesthetic value.

Through a careful holistic design process where energy and sustainability goals were defined from the beginning, we were able to meet our energy and sustainability targets. All the design team members worked together in the beginning of the design process to solve these issues and turn an energy nightmare of a building into a gem of high-performance design and construction.

The reality of our current economy is that there are going to be many more retrofit and adaptive-reuse projects in the upcoming years compared to new construction. The more we can be creative as architects and contractors, the better we can make our existing building stock perform to modern energy-code standards and beyond.

The Case for Reflective Roofs

Be the first to comment on "Satisfaction in Adaptive Reuse"