There is a saying that you can’t go home again. Essentially, it means after leaving a small community for a metropolis, you’ll never be able settle back into a simpler lifestyle or recapture days of yore. Six business partners in Saxapahaw, N.C., would beg to differ. Although half of them had left their home state of North Carolina to pursue big dreams in places like New York City and even on the other side of the world in Australia, they were lured back to the quiet Southern countryside for varying reasons and, consequently, were brought together by an unlikely place: Saxapahaw, pronounced Sax-puh-haw.

Saxapahaw is in the middle of nowhere but close to everywhere. It’s 14 miles west of Chapel Hill; 15 miles south of Burlington; and 15 minutes from I-85/40, a major east-west interstate. Saxapahaw’s economy had long been based on textiles, but when its two mills along the Haw River closed in the mid-1990s, the town of approximately 1,500 dwindled.

Mac Jordan, the grandson of the textile mills’ owner, was an architectural student at the time and focused his final project on the revitalization of Saxapahaw with the mills being central to his plan. By 2005, he had turned part of his architecture-school project into reality when he converted Saxapahaw’s lower mill into 75 loft-style apartments. Jordan then set his sights on the 100,000 square-foot upper mill and found five individuals who were eager to help develop the upper mill into mixed-use space.

With the help of a dedicated design and construction team, as well as the skill of local artisans, the unique ownership team has created a village-like atmosphere in the upper mill, including commercial space and condominiums that are true to the mill’s history while providing conveniences to which Saxapahaw’s residents had not been accustomed. In fact, Saxapahaw Rivermill has become such a draw that people from all over North Carolina and beyond are not only visiting Saxapahaw, but also settling there. 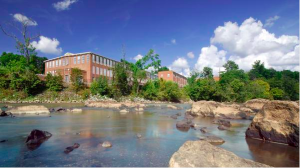 Saxapahaw Rivermill includes restaurants, a condo and an event center, drawing people from all over the country to live and play there. Photo: Clearscapes

Before the six-member ownership team officially came together, Jordan developed 19,000 square feet of the upper mill into a charter school. A gas station/convenience store, Saxapahaw General Store, had existed in mill space adjacent to the school for approximately 10 years. Grocery provisions and a grill were added to the store five years ago, about the same time the rest of the upper mill’s renovation began.

Meanwhile, Heather and Tom LaGarde moved from New York City to the Saxapahaw area to raise their children just as the lower mill renovation was nearing completion. Heather had grown up in the area, and Tom had played basketball for the University of North Carolina before entering the NBA. The couple established a weekly farmer’s market and summer music festival on the mill property as a way to attract attention to the lower mill’s loft apartments, which consequently helped generate interest in revitalization of the upper mill. As an extension of the festival and market, the LaGardes were interested in developing what would become the Haw River Ballroom, an event center, and Cup 22, a coffee shop, in the upper mill.

Oatey Co. Recognized by Local Organizations for Its Community Involvement

retrofit’s Website Is a Wonderful Extension of the Magazine