It’s not always easy to find the silver lining behind the sustainability cloud. The media never seems to miss the opportunity to exploit a crisis (global warming, anyone?) and, when it comes to the subject of water, statistics certainly don’t paint the prettiest picture either.

At the risk of sounding alarmist, potable water is in critically short supply. Common sense tells us that as the world’s population continues to increase exponentially, this limited resource will be in greater demand than ever. In fact, according to the 2014 United Nations report, “Water and Energy Sustainability”, to feed the world in 2050 “food production may need to grow by 70 percent, which may require 50 percent more water, but by 2025 two in every three countries will be water stressed and 2.4 billion people will face ‘absolute water scarcity’.” Further, the report suggests environmental degradation, competition for water, and scaling energy prices may aggravate the already inequitable access to water in urban and rural settings. 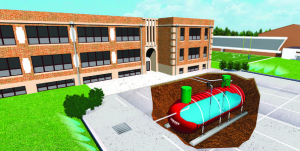 Water-conservation tanks can be used above and below ground to harvest rainwater, collect chiller-unit condensation,
recycle greywater and retain stormwater. PHOTO: Xerxes

Similarly, a recent study on water scarcity by international auditor KPMG suggests global demand for fresh water will exceed supply by 40 percent by 2030 “with potentially calamitous implications for business, society and the environment”. However, the good news is when compared with the more gradual and indirect implications of climate change, the KPMG report concludes water scarcity is a more manageable issue.

While state and local governments—as well as green-building rating systems, such as LEED—have placed a heavy emphasis on energy in the past, the tide is shifting (albeit slowly) to address the rising importance of water efficiency, particularly in areas that have been hit hardest with water scarcity.

“I’ve been saying for years that water is the next energy, and I’m waiting for that to truly hit,” says Dirk Mason, principal of sustainability consultancy The Compass Group, Madison, Wis., and a member of the Washington, D.C.-based USGBC’s Water Efficiency Technical Advisory Group. “It has to equal that of energy because our freshwater supply is dwindling across the country. We are decreasing our aquifers and we’re decreasing our supply of easily treated potable water, so it has to become an issue for us moving forward.”

Mason notes the price of water—particularly the costs associated with sewage—is increasing across a number of markets, which he believes will be a key driver in elevating water in the sustainability conversation.

Jake Arlein, partner and director of certification services at Environmental Building Strategies, San Francisco, agrees and says in California the drought has brought the issue of water savings to a head. Consequently, rising costs have made the decision to retrofit commercial buildings with more efficient fixtures much easier for his clients than in years past.

“Three or four years ago, we presented water-efficiency upgrades to existing buildings, and it didn’t really pencil,” he recalls. “Now we’re finding that not only does it pencil, in a lot of ways it pencils faster as a quicker payback than some energy-efficiency measures. Once we kind of started showing that to owners, they started really getting more interested.”

In some places, such as San Francisco, water-efficiency measures are being pushed through building ordinances, although they are mostly related to new-construction projects, Arlein notes, as efficiencies are much easier to implement when they’re written into the construction documents. For commercial-building owners and facility managers faced with meeting more stringent water regulations, the mandates may be met with initial pushback or skepticism, but Arlein says they ultimately see the value in it once the efficiencies are met and savings have been realized. Code requirements are a sure way to make a bigger impact on market transformation.

As far as voluntary measures, such as LEED, are concerned, an article on the USGBC website explains that the new LEED v4 expands water-savings targets (such as high-efficiency toilets, urinals and irrigation systems) from previous versions to appliances, cooling towers, commercial kitchen equipment and other areas that consume a huge proportion of water in many buildings. Additionally, new prerequisites in LEED v4 require commercial buildings certified to the rating system reduce their outdoor water use for landscaping and vegetation by 30 percent; indoor water fixtures must bear the EPA’s WaterSense Label; and projects must be capable of measuring whole-building water use, among others.

See the breakdown on page 2 of the new water requirements and credits under LEED v4, which are explained in greater detail in the Credit Library on the USGBC website.

Be the first to comment on "With Scarcity and Costs Rising at Alarming Rates, Water Efficiency Must Take Center Stage in the Sustainability Conversation if We Hope to Preserve Our Way of Life"