St. Lucie County School District (SLCSD) is a K-12 school district in Florida with more than 40,000 students and 5,000 employees. It is dedicated to safe and caring schools. During the past seven years, the district has not only made a commitment to the education of children, but also to creating healthier, more energy-efficient building environments that reduce operating costs. St. Lucie School District has implemented energy efficiency upgrades that include an ice enhanced chiller plant utilizing CALMAC’s thermal energy storage technology, independent metering equipment, air cleaning technology and more. The ice enhanced chiller plant has allowed SLCSD to save 30 to 40 percent on utility costs annually—in total, about $5 million in savings to date. 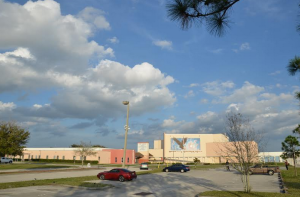 In 2007, SLCSD had one of the highest energy costs per square foot out of all the school districts in the state of Florida. The facilities within the district were wasting energy and the schools were faced with a lack of funds.

In 2007, SLCSD had one of the highest energy costs per square foot out of all the school districts in the state of Florida. The facilities within the district were wasting energy and the schools were faced with a lack of funds. Energy costs within the district were paid for using the same pool of finances that covered teacher salaries. This meant that energy inefficiencies within the facilities were having serious financial impacts on how much salary was available for educating students.

“We did our homework and looked at a variety of technologies,” says Sean Murray, energy manager of the St. Lucie School District. “After looking at CALMAC and looking at some of the manufacturers we decided that there was no competition, that we were going to pick the CALMAC tank based on a superior design and operation of those tanks.”

The first school to implement IceBank tanks in the form of a full storage system was Centennial High School in 2007. In this full storage system, high-efficiency Trane chillers create enough cooling at night, when outdoor temperatures are low, and energy costs are less that half of what they are during the day, to cool the entire school from noon to 9 p.m. the next day. This cooling load is stored overnight as a block of ice in CALMAC IceBank tanks. Then the next day, when school opens, the chillers satisfy the cooling load requirements. At noon, the stored ice is used to cool the school until 9 p.m. without any assistance from the chiller. This system is able to shift roughly 1,200 peak tons of cooling.

Electric utility costs savings for Centennial High School proved to be about $300,000 per year. By independently metering the chiller plant, Centennial High School was able to identify a 50 percent reduction in cooling costs because of energy storage. Because of its success, the St. Lucie School District began to install the IceBank energy storage tanks in its buildings whenever chiller replacement projects became necessary. 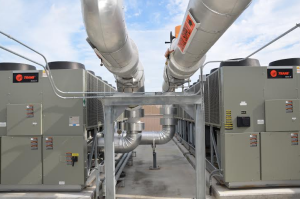 CALMAC’s IceBank thermal energy storage was identified as an important solution for reducing utility costs in the district’s facilities.

Several schools like Centennial High School were able to take advantage of Florida Power & Light incentives that cover most of the cost of installation for full shift storage. However, not every school in the district is powered by Florida Power & Light, which uses time of use pricing. Many of the educational facilities in St. Lucie are supplied electricity from Fort Pierce Utilities Public Utility (FPU). FPU implements a $10 per kW demand charge and does not offer TOU rates incentives to help offset installations costs, so it was more effective to use partial storage systems in the schools served by this utility.

The facilities using the partial storage system create and store enough ice to assist but not fully handle peak cooling requirements. Throughout the day, stored energy can be discharged to help the chillers provide cooling. Ice storage is used in tandem with the chiller to cool occupants during peak cooling load periods. This flexible system operation allows the schools to utilize smaller, more efficient chiller equipment and reduce the peak demand charge from the utility. One partial storage system at Lincoln Park Academy lowered cooling costs by 32 percent.

With a strong commitment to improving the schools, St. Lucie schools not only installed cost saving equipment but promoted energy efficiency awareness throughout the schools. St. Lucie engaged the students and faculty to participate in making the schools better.

Local displays were installed in multiple sites to showcase that school’s energy performance, which naturally led to friendly competition between facilities that were backed by incentives for improvements. These initiatives extended beyond physical upgrades to the facilities and helped change the culture of the school district. For example, because of the increased awareness of energy usage, it became common to group after-school activities into fewer buildings in order to minimize wasted resources.

In addition to the installation of energy storage, other upgrades were made to increase the efficiency of heating and cooling operations. Independent metering equipment was installed to separately meter various systems, which allowed St. Lucie to gather performance data and ensure optimal results from different upgrades and equipment. In order to improve the operation of the existing system, control system enhancements were implemented with minimal costs. Other strategies were embraced to improve operational efficiency by reducing reheat conditions, including the use of occupancy sensors, which has minimized sub-cooling during unoccupied periods by reducing cooling air flow. Adjustments were also made to the pumping system, which have reduced the amount of chilled water flow. High efficiency chiller equipment kept part load efficiencies below 0.30 kW per ton. 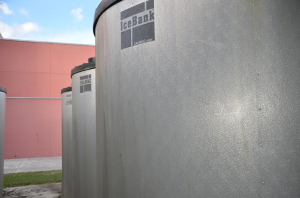 Partial storage strategies are also dramatically reducing operating costs. Lincoln Park Academy is a perfect example. Prior to installation, its three-year average energy costs were $475,000. One year after using partial energy storage, energy costs were down to $334,000—a 32 percent annual reduction.

In the 2008-09 school year, the St Lucie School District was ranked 60th among other statewide districts in terms of energy costs per square foot. The use of energy storage, in combination with the other energy upgrades, has catapulted the district into the top 20. The district is benefiting from a 30 to 40 percent reduction in annual energy costs and has saved about 5 million in costs since the initiatives were undertaken. This is the equivalent of salaries for 70 teachers.

“Our board is thrilled with the energy cost savings, and we have other school districts, county governments and colleges wanting to understand what we did here,” adds Murray.

“St. Lucie should be commended for the way they completely changed the philosophy throughout the entire school district when it comes to energy efficiency,” says Mark MacCracken, CEO of CALMAC. “Everyone has bought into their goals of creating an energy-efficient, healthy learning environment. Their use of energy storage has allowed them to take control of their utility costs and use the savings in important areas, such as teacher salaries.”

Rooftop Units Are Available in 15- and 20-ton UHE Models