Scott Sklar could be the “poster child” for the clean-energy industry. He has been in the field for more than 35 years, getting his start in the U.S. Senate as an aide and then energy staffer during the oil embargo of 1974. He then worked for a small national laboratory on clean-energy field applications before transitioning to lead an environmentally organized non-profit advocating clean energy during the Reagan administration. Sklar was executive director of the Solar Energy Industries Association, Washington, D.C., for 15 years, and for the last 13 years, he has been operating his own technology optimization company, The Stella Group Ltd., which has offices in Washington and North Arlington, Va. The Stella Group blends energy efficiency with renewable-energy technologies for Fortune 500 companies, government and the U.S. military.

Sklar also practices what he preaches. He lives in a zero-energy 1921 Sears kit home, and his North Arlington office also is a zero- energy building. The Washington office, which overlooks Lafayette Park in front of the White House, features solar modules from 12 different companies. In total, he has applied 45 different clean-energy technologies on his buildings, including fuel cells, geothermal, solar and wind. Sklar offers tours of his home and offices twice per week, 50 weeks per year.

“I do tours and training sessions because engineers and architects have read about these technologies, but they’ve never touched them or seen them,” Sklar says. “They have these crazy ideas about why they won’t work and what they cost. I tease them that I’m going to drag them into the 21st century if it kills me.”

Sklar agreed to speak with retrofit about some of the misconceptions about renewable energy, including financing and the future of the marketplace. His no-nonsense style is a reminder that we’re at the beginning of what is an exciting transition toward clean energy. 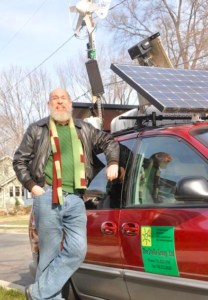 Sklar and his van, which he drives to environmental, energy and science events throughout the Washington, D.C., metropolitan area to teach about clean-energy technologies. The van is covered with photovoltaic panels and a marine wind turbine, which charges a carbon super capacitor battery bank that powers a DVD player and an all-weather 50-inch monitor.

r: We hear a lot about American solar companies, like Uni-Solar, going bankrupt. If manufacturers are going bankrupt, how is the installed cost of solar going to decrease?

Sklar: Actually the cost is coming way down. Bankruptcy is just a state of cash flow. Installers install solar from many different companies and, by the way, I have Uni-Solar on all three of my personal installations as part of the technology mix. Uni-Solar’s assets will be bought by some other big company.

The solar industry is booming. It’s up in double digits. It has been up every year, including through the economic meltdown, and the technology is getting cheaper. Just like with computer chips, when you get economies of scale you get lower costs. Many of the Chinese manufacturers are below $1 a watt, as are some of the U.S. manufacturers. Remember, panels are only 40 percent of the system. It’s like saying a car engine is going down in cost. The car is cheaper, but there’s a lot of other stuff in the car, too.

Sklar: No, we don’t need a lot of feed-in tariffs. Net-metering only provides credit for the amount of power you don’t use. You’re using your power first from the solar and then anything you don’t use goes to the grid. Most systems, frankly, aren’t big enough to make a lot of money. On my home and business, I use batteries because batteries are much more valuable than net-metering. Users must determine whether the extra power is more valuable to send to the grid for an electric credit or use when the sun goes down and always have backup electricity and surge-free electricity.