r: Building-integrated photovoltaics have been gaining popularity. Do you anticipate they will continue to expand?

Sklar: Big time. Several manufacturers are coming out with roofing shingles with integrated solar, and I’ve used the peel-and-stick PV laminates on my personal buildings.

I anticipate more nanotechnology photovoltaics and more use of films, dyes and inks. PV may wind up in glass or other envelope products. We have some companies now coming out with hybrid solar-water-heating PV modules. Also, I’m using electrochromic glass in many of my projects to reduce heat gain during the summer and provide privacy throughout the year. I’m able to integrate PV with this glass, so I don’t have to connect it into the electricity in the building. You’ll see a lot more hybrid and integrated products, which is the way it ought it go. We’re just at the start of it—like where cellular was in the 1970s.

r: Is there still concern about solar technology working in overcast and low-sun environments?

Sklar: That’s so ridiculous. First of all, solar water heating actually makes more sense in the North because energy rates are higher. It’s a 7 percent difference in average hours of sunlight from Maine to Florida, so you need 7 percent more panels in the North. There are, of course, some kinds of PV that will stop working under clouds/shading but there are a lot of panels where the amount of power generated is simply reduced. Even on the cloudiest day here, my system is pumping out 30 percent of the electricity I need.

r: Is there a trend in small wind power inland, on rooftops, and away from mountainous or shore locations?

Sklar: I use a lot of small wind turbines with buildings. I recommend they be installed on monopoles off the corner of a building. In new construction or major renovations, I actually put the monopole within the outside wall so it looks like it’s attached. All the torque of the turbine is always on the pole, not on the structure itself, which may cause noise and vibration. 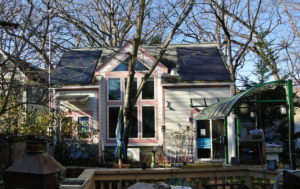 Wind blows mostly at night and generally when it’s cloudy or rainy. Small turbines work with less wind. I have a wind turbine off my 2-story office in Virginia; you can hardly hear it, and it works great. By the way, small wind turbines are great with solar because, obviously, solar works with the sun up and the wind’s blowing when the sun’s down. With a battery bank, you can store the energy you’re producing and draw from the battery when you need it.

Sklar: There are a lot of different reasons. The main reasons are outdated zoning and uneducated people. There are maps that show certain areas get no wind, which is false. People think small wind turbines are noisy or kill birds and bats. There are also aesthetic concerns, but these turbines are so small they’re not in your face, like a cell tower or wind turbine for a utility. I just did a presentation where I showed a photo of small wind, and I actually had to walk up to the screen to show where the wind turbine was because an audience member couldn’t see it.

Small wind is lower cost than PV, so when the wind is blowing it’s pretty cheap energy. This technology will come. We’re still in the formative stages of integrating it, particularly in the suburbs and urban environment.

r: When will fuel cells and geothermal become mainstream?

Sklar: I use a fuel cell at my Virginia office. The industry is young, but there are many reasons why building owners will want fuel cells. It augments power during the summer when I have spiked loads, which is when my heat pump is straining because it’s 100 F and 95 percent humidity.

I have a direct-exchange geothermal heat pump on my home. It is the lowest-cost way to heat and cool a building. It has reduced the electric load for my cooling by 67 percent. It had a four-year payback, which includes the drilling.

This is why I bring people through my home and offices. I want them to see I’m not a rich movie star with a $7 million house who doesn’t give a crap what I pay for. I’m a middle-class person living in a middle-class suburb. I want to demonstrate 45 new commercial technologies working seamlessly and that it’s cost effective. Why wouldn’t you want to install these technologies?