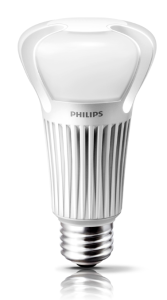 Philips continues to deliver on the company’s commitment to making quality LED bulbs more affordable for consumers with its second generation 75-watt and 100-watt LED equivalent bulbs that are now ENERGY STAR (ES) qualified. With utility rebates of up to $10 per bulb, these latest additions to the industry’s largest portfolio of ES-qualified products may be found on shelves for as little as $9.97 and $14.97, respectively.

The Philips 15-watt A19 and 19-watt A21 are second generation bulbs that offer the same quality white cap as the rest of the Philips retrofit bulb lines, while also gaining two watts in efficiency over their first generation predecessors, which were introduced two years ago. In addition to offering familiar, soft white light, these Philips bulbs fit into existing fixtures and work with standard dimmers, giving consumers a simple, long-lasting solution for the home.

Philips estimates that about 90 million 75-watt incandescent light bulbs are sold annually, while the 100-watt incandescent accounts for nearly 25 percent of the 4.4 billion sockets found in the U.S. Switching to these LED replacements has the potential to reduce energy use by over 86 million megawatts of electricity per year with potential cost savings of more than $8.5 billion. According to Philips estimates, it could also eliminate 63 million metric tons of carbon emissions annually, or the equivalent of removing nearly 13 million cars from the road.

As with all bulbs in the Philips LED retrofit lighting family, these LED bulbs have a rated life of 25 times longer than a standard incandescent. Over their lifespan, the 15-watt A19 and 19-watt A21 can save households or businesses about $160-180 per bulb, giving consumers more choices than ever before to reduce energy costs. For those within the retail or hospitality sector, the bulb will provide a substantial return on investment, through extended bulb life and reduced energy and maintenance costs.

Area Luminaire Can Be Used in Off-grid Lighting Applications

Add Colorful Lighting to a Space