They recently replaced the pub’s smooth, hard-surfaced plaster ceiling that added little in terms of ambiance and noise control with a tin ceiling. The result was a significant reduction in reverberation time and overall noise level, plus a decorative new addition to the establishment’s Victorian-style decor.

Enhanced Acoustics and Aesthetics Opened in 1978, the restaurant was created in a space that had formerly housed a printing company. During the years, the plaster ceiling had become nicotine stained. “We decided to go smoke-free ” DeForge says. “Once that deci- sion was made, we also decided to paint the ceiling a sienna color to eliminate the stains.” Although the re-decorated ceiling resulted in a dramatic color change, it had no effect on the acoustics in the space.

“We wanted to improve acoustics for our patrons and our entertainment,” DeForge explains. “We have live music on Fridays and Saturdays, and the hardwood floor, plaster ceiling and other hard surfaces affected the sound quality of the larger acts.” 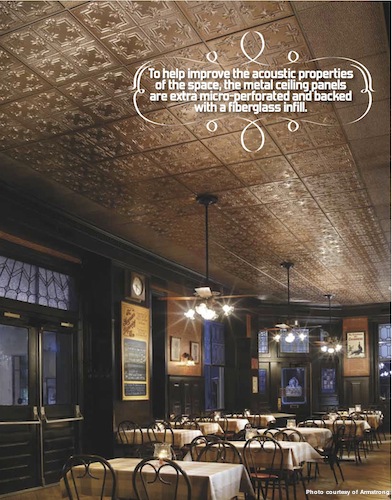 To help improve the acoustic properties of the space, the metal ceiling panels are extra micro-perforated and backed with a fiberglass infill. The perforations measure only 7/10 mm in diameter, which makes them nearly invisible. However, the perforations allow the ceiling to achieve a noise reduction coefficient of 0.85, meaning they absorb 85 percent of the sound that strikes them.

Ross says she and the staff have observed a dramatic difference in acoustics. “The clarity of conversations is much better now because people don’t have to talk above the crowd noise,” she states. Acoustical testing before and after the installation of the new ceiling validates the staff’s observations. According to the findings, the new ceiling system not only reduced reverberation time by 44 percent, but it also lowered the occupied noise level up to 7 decibels.

To attain the aesthetic goals, the 2- by 2-foot copper-colored tegular panels feature a stamped metal pattern that was popular in the 19th century. The panels were installed in a color-coordinated grid system suspended from the existing plaster ceiling.

DeForge noted the visual impact of the new ceiling has not gone unnoticed. “Many of our regular customers who never looked up before have definitely noticed,” he states. “And even though it’s a brand new ceiling, it has the look of a ceiling that’s been here since we opened because it fits in so well with our Victorian decor.”

Be the first to comment on "Sights and Sounds"