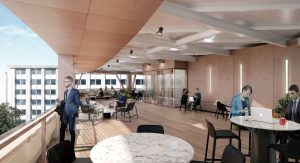 The AGU building will feature enhanced envelope insulation and dynamic glass that shades itself in sunlight to limit heat gain.

Nearly 50 different strategies were considered at the start. Over time those were whittled down, refined and bundled together. Although AGU is open to new technologies, the group is also very judicious in its choices.

“The owners are very diligent about reviewing product specifications, information and research,” Falasca says. “They even did their own energy model to test some of our assumptions. They’re not afraid of new technology, as long as the facts and research are there to back it up. We eventually narrowed it down to just over 20 strategies that were implemented in the building.”

One example of the kind of cutting-edge technology set to be employed on this project is a hydroponic phytoremediation wall, which helps filter toxins out of the air and assists in recirculating clean air without requiring an air-handling system to pull in unconditioned, outside air.

Another, more conventional approach was the incorporation of more than 700 solar panels on the roof of the building. While a boost to the energy equation, the PV did bring up some issues with historic neighborhood zoning and required a historic preservation review. Ultimately, smart design alleviated concerns of the PV array going over the property line, and the installation could move forward.

Energy will flow directly from the PV array to a direct current LED lighting system in the building, rather than converting the power to alternating current and sending it out to the grid. This limits the energy lost in conversion and transmission and creates more efficient building power generation. “How we use energy in this country may change when people start generating power onsite because there are great efficiencies,” explains Holly Lennihan, Hickok Cole Architects’ project manager.

The AGU retrofit also will include a municipal sewer heat-exchange system that recovers thermal energy from wastewater and a radiant cooling system that will circulate chilled water through a network of pipes. The building also will feature enhanced envelope insulation and dynamic glass that shades itself in sunlight to limit heat gain. Work on the retrofit is underway and a complete move-in is expected by spring of 2018.