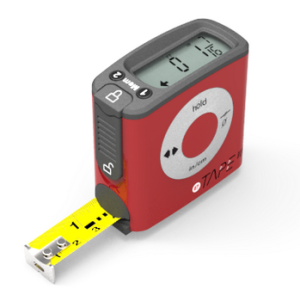 “Measure twice, cut once,” the saying goes. Or you can simply get it right the first time. We all know the hassles of getting measurements right and the frustration of measurement mistakes. Designed by a professional builder, eTape16 solves all those problems in one tough, compact tool. Like a traditional tape measure, eTape16’s metal blade is available in U.S., Metric, or U.S. and Metric markings, but that’s where the resemblance ends. eTape16’s large, easy-to-read digital readout is accurate to 1/16 inch or 1 millimeter. A simple push of a button allows one to read the measurement easily in inches, feet, fractions, and decimals, and converts to metric too. Another feature is inside/outside measurement; with the simple touch of a button it toggles between outside measurement of the blade length alone and inside measurement, which automatically adds the 3-inch width of the tape measure case to the readout. Inside measurement is ideal for those tricky situations where the case runs into a wall and you have to mentally add its width to the length of the exposed metal blade. But that’s just the beginning of eTape16’s sophisticated features.

eTape16 has three built-in memories: “hold”, which retains a measurement even after the blade has withdrawn into the case, and two long-term memories that will retain readings even after the tape shuts off and until they are overwritten. Memory means you no longer have to memorize or write down readings to transfer a measurement. And for specialized functions like hanging a picture on a wall, the push of a button automatically calculates the center point of a measurement. Finally, the re-zero function lets you measure the distance from a previously measured point without withdrawing the blade. This is ideal for measuring intervals without having to re-anchor the end of the blade for each measurement, for example, marking 2-foot intervals along a 10-foot board.

The tape is built to last, with a tough polycarbonate case and rubber bumper to protect the readout. The CR2032 coin battery can last for up to 64 hours of continuous use, and replacements are widely available and easy to install without tools. To prolong battery life, eTape16 shuts down automatically after five minutes of non-use.

eTape16 was created by Stephen Crane, a graduate of MIT, who was working for a naval architecture firm developing America’s Cup racing yachts and wanted an easy, precise way to determine metric measurements. He initially took his patented digital tape measure to the Evans Rule Division of L.S. Starrett, and 18 months later the Starrett Digitape was in production as the world’s first digital tape measure. Over the next four years the first generation Digitape sold 1.5 million units. In January 2014, Crane established his own company, and in spring of 2015 took a new, improved product to market, completely redesigned with the homeowner in mind, with a strong emphasis on styling, compactness and ease of use. The company is continuing to add features, including Bluetooth connectivity to be announced for the iOS operating system this fall, followed shortly by an Android version.

Outdoor Luminaire Can Be Controlled with Bluetooth

Sensors and Nodes Are Easy to Install