Installing 225,000 square feet of terracotta material took two years. The team had to take care not to disturb tenants throughout installation. They even tested the concrete drilling equipment to determine how to operate it quietly. PHOTO: Ashley Streff

When the building at 215 East 68th Street in the Upper East Side of Manhattan was erected in 1962, masonry technology was not where it is today. After a series of repairs, each becoming more costly, the building owners decided to tear off the existing exterior and start anew, creating a building that is structurally and environmentally sound while giving it a sleek, streamlined appearance. 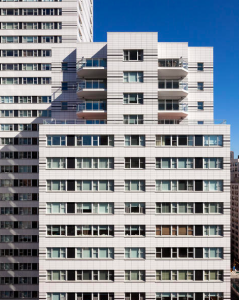 “Masonry really wasn’t well understood at that time,” says Ralph D. Forst, AIA, president of New York-based Forst Consulting and Architecture PLLC, the building’s architect of record and exterior wall consultant. “This wall is constructed in a manner in which you would construct veneer masonry, but the building is 350-feet tall and it didn’t have a single expansion joint on it. There were serious technical problems with the brick work because of that.”

New York City’s Local Law 11, which states that every owner of a building higher than 6 stories must retain an architect or engineer to inspect their façades every five years, is a requirement of the New York City Department of Buildings. The required inspections of this 34-story apartment building consistently found the original white glazed brick façade to be in what Forst describes as a state of distress, brought on by the building’s movement throughout time and the lack of expansion joints to accommodate that movement.

“For a long time these things were handled on a repair basis,” Forst says. “We finally got to the point where repairs were not cost-efficient or prudent. The owners undertook a complete recladding of the building.”

“Every five years there would be an inspection and every five years there would be repairs,” recalls Paul Mandel, vice president of New York-based Rudin Management Co. Inc., the owner of 215 East 68th Street. “The building was built at a time when there were no expansion joints in masonry walls. The frame is lightweight concrete. Over time, the building shrunk, which is natural with concrete of this nature. There was pressure downward on the skin of the building and there was lateral movement across the frame of the building, which mostly has ribbon windows.”

A large part of the two-year development process of the more than 600-unit tower involved selecting the appropriate material. “We must have looked at 11 different schemes—from repair as necessary to pulling all the brick off and reflashing and reinstalling it or removing it and replacing it with a rainscreen,” Mandel says.

After narrowing down options, it came to a choice between a new brick solution and a terracotta rainscreen façade. “The rainscreen was never a conscious decision on the part of the owner,” Forst recalls. “That came up as a result of understanding the reinforcing requirements and our recognizing the method of reinforcing was closely approximating what you would do for a rainscreen system. We thought there would naturally be some sort of economy there. We bid the project [with terracotta and with brick] and the owner made the decision based on the merits of the system coupled with the fact that it was an economically feasible decision.”

Mandel adds small-scale trials assisted in the decision-making process. “We did extensive mockups where we built two full floors of brick and two floors of terracotta on one face of the building to see how they would work,” he says.

“When we were doing analysis, we realized backup block couldn’t support new brick the way the old system had worked,” Mandel explains. “Either way, we’d have to reinforce the backup block; the rainscreen system supported that.

“Aesthetically, the terracotta system was very pleasing. Replacing the brick with brick would have meant every five years we would’ve had to worry about the mortar joints,” Mandel continues. “Terracotta uses no mortar. It’s clipped into an aluminum framing so from tile to tile, it’s an open joint. The maintenance costs are much less.”