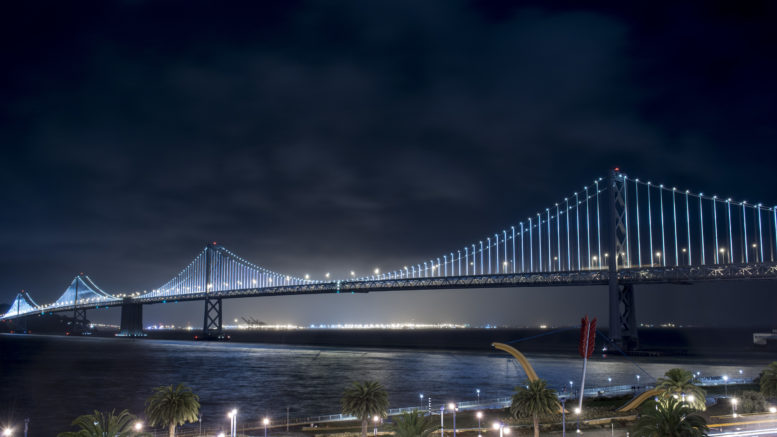 The Bay Lights is a one-of-a-kind LED Lighted bridge sculpture that is expected to bring nearly $100 million in revenue to the local economy.

In a literally shining example of public-private partnership, The Bay Lights is a one-of-a-kind lighted bridge sculpture that will be viewed by more than 50 million people during its two-year installation. Fulfilling the brainchild of Ben Davis, chairman of Illuminate the Arts, a nonprofit organization dedicated to the creation and presentation of community-activating public art, and the vision of acclaimed artist Leo Villareal, with the support of the Sacramento-based California Department of Transportation, the San Francisco bridge is expected to bring nearly $100 million in revenue to the local economy.

The Bay Lights LED lighted bridge sculpture is expected to bring nearly $100 million in revenue to the local economy.

Villareal is a pioneer in the use of LED lights and computer-driven imagery. He networked 25,000 LED nodes to create complex algorithms and patterns across the bridge’s western span. These patterns dynamically recombine themselves, transforming the bridge into a living piece of art. In the end, almost 4 1/2 miles of product was installed on the bridge, roughly equal to the total length of the Bay Bridge, counting both spans. The lighting will be viewable from San Francisco and points north, but not by drivers crossing the bridge. Organizers believe The Bay Lights to be the world’s largest LED light sculpture.

“This isn’t about just lighting another bridge with white or colored light,” Villareal explains. “The Bay Lights emphasizes the use of ‘intelligent’ lighting, fully utilizing individual control and the ability to create 255 levels of brightness per node. The custom software I have created allows for the creation of ever-changing patterns specifically created for this location with the goal of producing a work of art.”

Organizers of The Bay Lights have provided all the financial support for the project through private funding. A live webstream and video archive are available at www.thebaylights.org.

Be the first to comment on "The Bay Lights"