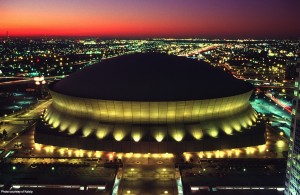 The restoration of the Superdome, undertaken in three stages, is now in its final stage. The extensive damage suffered in Hurricane Katrina required the replacement of almost 10 acres (440,000 square feet) of roofing.

The Louisiana Superdome has a remarkable history. When the state-owned dome opened in August 1975 its architectural appeal gained immediate attention. The dome quickly became a state landmark and one of the country’s busiest multipurpose stadiums. When Hurricane Katrina struck New Orleans in August 2005, the dome sustained roof and water damage while protecting nearly 30,000 people from the ravages of the storm outside its walls. Steps to repair the dome, a vital part of the area’s economy, began a few days after the storms passed.

As members of the international design and build community monitor the four-year restoration of the dome, an innovative new façade system is gaining their attention. It is designed to meet the dome’s specifications for restoring the unique aluminum exterior to its original grandeur while allowing removal and replacement of individual panels.

The Louisiana Superdome has been undergoing major improvements in three phases. Phase One included replacing the outer surface of the 9.7-acre spray polyurethane roof, installing a new video-score-message board system, remodeling concessions stands and kitchens, and upgrading sideline and box seats. This phase was completed in September 2006.

“We took an inventory of every damaged panel on the building to prepare a repair package for FEMA. We could have replaced just the damaged panels, but we would have had a striped façade that looked like a zebra.” — Brad McWhirter, project manager for Trahan Architects

Phase Three focuses on replacement of the dome’s most visible feature — its exterior walls. The lower portion of the exterior is now clad with a new aluminum wall façade system, and work is underway on the exterior’s upper portion.

A Historic Rehabilitation Mixes Preservation and Technology with Cocktail Culture

Be the first to comment on "The Saints Go Marching In"