Nature is “in”. In recent years it seems there has been a greater desire to bring the natural world back into our lives. Farmers markets are increasing in popularity in cities across the country. Urban gardens are popping up in unlikely places, like rooftops or on land that was left undeveloped as a result of the economic crisis. And cities are demanding more greenery from local businesses; for example, Chicago threatens to fine restaurants with outdoor patio spaces that don’t have at least 50 percent of the boundary covered with live plants. Studies suggest access to nature creates better mental and physical health in humans; as Landscape Architect David Fierabend, principal of Groundswell Design Group LLC, Hopewell, N.J., simply states, “It makes people happy.” 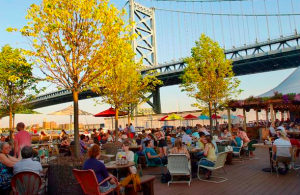 Morgan’s Pier: As the name suggests, this seasonal spot
overlooks the Delaware River and Benjamin Franklin Bridge in Philadelphia.

Fierabend’s six-year-old firm has a mission not only to create beautiful natural environments that make people happy, but also to use nature as an opportunity to educate. “We think about how our landscape is going to benefit the environment or people, so a lot of our work revolves around community gardens where you’re actually teaching and harvesting,” he says. “We’re trying to drive home a mission beyond making a space pretty. It’s also about reclaiming, repurposing and recycling a space and elements within it.”

Fierabend’s mission has led to an eclectic portfolio of unique projects that are reminding urbanites nature makes them happy.

Delaware Avenue along the Delaware River in Philadelphia has suffered from inaccessibility since Interstate 95 was built between the river and the city. However, a few brave developers are dedicated to drawing people back to enjoy the waterfront’s stunning views. One of them, Avram Hornik, approached Fierabend in 2012 to design what would become his latest restaurant, Morgan’s Pier. As the name suggests, the seasonal spot would overlook the Delaware River and Benjamin Franklin Bridge. Hornik wanted a picnic menu and a backyard beer garden feel.

To meet these objectives, Fierabend brought in 11 20-foot Linden trees and placed them in flexible box-wire planters, which will expand as the trees’ roots grow. More than 1,000 plants in 160 linear feet of planters were added to green the space. Perhaps most remarkably, Fierabend reused materials that had been discarded on the pier, such as industrial spools for tabletops and pallet wood for rustic accents. As a result, the new spot feels as though it has always been in its location. The design garnered Fierabend’s team a 2012 Excellence On The Waterfront Design Competition award from The Waterfront Center, Washington, D.C. “We recycled 99 percent of that project back into the project,” Fierabend recalls. “The concept was really about set design.”

And the concept worked. According to a 2012 report in the Philadelphia City Paper, Morgan’s Pier has brought crowds of Philadelphians back to Delaware Avenue: “Since Morgan’s Pier opened in May, … not only do people go, but if the crowds were any indication when I checked it out, it’s the summer 2012 destination. From gurgling newborns to kulats-wearing grandmas, Elkins Park to Packer Park, Morgan’s Pier attracts a wider cross section of the city than a Phillies game. Old, young. White, black. Lawyers and nurses and students and plumbers.” 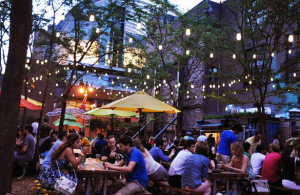 Pop-up Beer Garden: Created in an empty lot slated for development in two or three years, Fierabend worked with the Pennsylvania Horticulture Society, Philadelphia, and the Morgan’s Pier developer to bring the short-term venue to life.

The success of Morgan’s Pier led to Hornik asking Fierabend to collaborate on more outdoor projects around the city. Fierabend, who is a board member in the Philadelphia- based Pennsylvania Horticultural Society (PHS), had an idea. PHS had created pop-up gardens the past two summers in an effort to green the city and spread enthusiasm for horticulture. Although the organization had never incorporated food or drink with its short-term venues, Fierabend thought it made sense to join forces with Hornik. “The horticulture society wants to expand its mission to a younger crowd,” Fierabend notes. “I was thinking this could be a great marriage because Avram has liquor licenses and understands food and entertainment. I presented it to the horticulture society and they loved it, so we ran with it.”

The chosen site was an empty parcel of land on Broad Street in an area of Philadelphia known for retail stores and performing arts centers. “The space has plans to be developed but probably not for two or three years,” Fierabend explains. “It is wedged between two really cool pieces of architecture—a historic church and an abandoned building with graffiti all over it—two different worlds.”