Again, Fierabend’s concept for what was now going to be a pop-up beer garden was focused on repurposing. Old shipping containers are easy to obtain in Philadelphia, so Fierabend purchased two to retrofit into a bar that sells local beers and a kitchen that prepares unique snacks, such as a chipotle short-rib sandwich. LED lighting was strung over recycled benches. Pallets were used to create seating that invites guests to lounge upon cushions, throw pillows and blankets. Vintage rockers found in resale stores were painted bright colors, and tables were made from discarded electric spools. 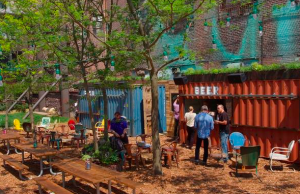 Of course, gardening is a major aspect of the pop-up beer garden. Raised beds were built that hold plants with inspiring names, like elephant ear, musical notes, balloon flower and wishbone flower. Fierabend found a grove of honey locust trees in Ringoes, N.J., from which he sourced 21 trees to be planted in the beer-garden space in the exact same configuration as they had grown in the forest. “We wanted it to be very natural,” he says.

Although the pop-up beer garden, which opened in May and closed in October, was created for one season only, there has been talk about recreating it for two or three more years in the same spot. “It has been crazy successful. There were lines around the block for it. Who knew?”, Fierabend marvels. “The last time I was at the beer garden there was a young group of women—21 or 22—rocking in the rocking chairs; there were two women in their 90s, drinking soda; there were two girls in their 30s, knitting; and some college guys. All these different generations made me realize people want something like this; it can bring people together.”

With this in mind, the Children’s Hospital of Philadelphia (CHOP) decided it wanted to create a natural space on the roof of its Seashore House, a 4-story building built in 1998 between the main hospital and a pediatric research center. The Seashore House is named after a rehabilitation house in Atlantic City, N.J., that was a respite for chronically ill children in the 1930s. When Fierabend was hired to create a healing environment on the rooftop, he embraced the seashore concept. 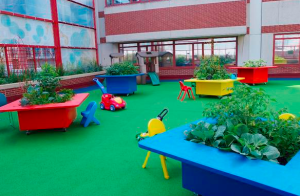 Seashore House: The rooftop of this 4-story building was retrofitted into a healing environment for ill children at the Children’s Hospital of Philadelphia.

“There is music playing and the sound of gulls,” he says. “We brought in sea grasses and things you would see at the beach. We wanted this to be a calming, healing space.”

Not only can children look out from their rooms and see the garden, but they can actually dig into the soil, plant native species and edibles, as well as harvest and eat the fruits of their labor. Fierabend notes: “We had these huge planters built in the air so kids in wheelchairs can reach them and get around them. The program is so amazing and very rewarding.”

The success of the rooftop garden, which won a 2012 PHS Community Greening Award, has Fierabend and the hospital now collaborating on a healing labyrinth that will be created on the campus of CHOP’s new Karabots Pediatric Center in West Philadelphia.

Fierabend sees each one of his projects—as well as the individual plants, furniture and lighting aspects—as art that brings people joy. “We start each project with a blank canvas and paint layers on it,” he says. “Landscape architecture involves color, texture, smell. I love using grasses just because they have a really great feeling to them; they flow in the breeze, move gracefully, can have a little dew on them. It’s like a piece of sculpture almost. Landscape changes; things grow. It’s constantly moving, and I love that. I get to create magic outside that is pleasing to the eye and evokes senses.”

The Park Creates a Plaza on the Las Vegas Strip