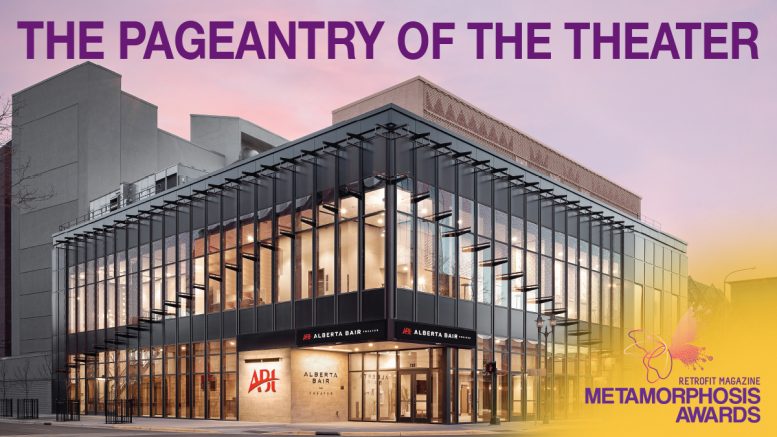 The glitz and glamour of a theater performance is what the audience remembers. But the design team at Cushing Terrell now has a particular appreciation for the unseen yet detailed work that goes on backstage. After renovating the 90-year-old Alberta Bair Theater in Billings, Mont., it has become clear how important hidden elements are in a theater.

“The structural team, we’re kind of always behind the scenes; we’re not at the forefront like architecture,” says Dane Jorgensen, a structural engineer and associate at Cushing Terrell. “We worked really closely with our theatrical consultant and the technical directors. All the things we did, no one’s ever going to see or notice, but they’re going to experience it through increased quality of shows, sounds, all those things.”

Designed by Robert Reamer, best known for the Old Faithful Inn in Yellowstone National Park, Alberta Bair Theater was financed in part by the 20th Century Fox Corp., which purchased the land from Charles M. Bair. The theater is named for Charles’ daughter. It opened in 1931 and was renovated—with some questionable choices—in the 1980s. Several decades later, the building was in desperate need of changes, from making it more ADA accessible to upgrading the stage facilities to make it a more desirable destination for traveling shows.

There was debate over building a new facility, but estimates placed that plan in the $25 to $30 million range while renovations to the existing building would cost a far lower $13.6 million.

Planning began with a few major goals: First was to expand the lobby to allow for more pre- and post-performance activity.

The theater team also wanted to increase the restroom counts from 22 to 40 and simplify guest circulation between floors by eliminating pinch points and dead ends. An elevator and new balcony seating had to be installed for ADA accessibility while finishes, furnishings, fixtures, sound and lighting were updated. In addition, there were many upgrades needed, literally, behind the scenes. Ultimately, Cushing Terrell was tasked with restoring the pageantry of the theater by improving guest and performer experiences.

The design team had a bit of a mystery on its hands as planning began: No documentation from the 1930s build existed to show dimensions, layouts, material strengths or other information. Because the building was still actively used during the planning stages, it wasn’t possible to do any demolition to locate the necessary information. Jorgensen recalls sitting in the fly loft—the space above the stage—sketching a gravity load pass that had been altered during renovation, trying to determine where loads originally went, how heavy they were and where they would go after renovations.

Once construction began, there was a lot of field verification and near-daily site visits to validate the recorded and presumed conditions and to update dimension and connection details. Among the oddest findings were the decisions made in the 1980s renovation. Unfortunately, much of the original Art Deco details were removed when the theater was gutted to add more seats and the fly loft. The ’80s renovation also included the addition of an awkward 11.75-degree angle off the orthogonal to enlarge the stage size, thus changing everything inside the structure.

In the acoustic modeling, Threshold Acoustics and the Cushing Terrell team found the redesign from the 1980s didn’t have the intended effect of improving sound quality. In fact, seats close together were getting very different acoustic experiences. To correct the issue, the team built diffused, curved cheek walls to disperse sound more evenly throughout the space.

To compete with other theaters for traveling performances, Alberta Bair Theater needed to upgrade its back-stage capabilities. Crew circulation corrections were required. For example, the catwalk added in the 1980s was only accessible during the show from the hallway outside, and it lacked a sound and light lock that would decrease performance interruptions. Once a crew member climbed onto the catwalk, he or she would dead-end on the opposite side. The solution was to add two 88-inch-deep open web joists. The team decked the bottom cords and used the bottom and top cords to support the reflectors and rigging beams. The upgrades would allow crews to rig out about 15 feet over the seating area.

To keep the load off the existing construction, a new column was added on one end, grounded by helical piers in a separate foundation in the basement. Brackets were installed into a concrete wall that was added as part of some lateral upgrades, which also helped the team lift the rigging into place (done “blindly” from outside the structure).

“The technical rigging aspect of this project was very involved and detailed,” Jorgensen says. “We about tripled the capacity of the existing stage rigging because they were at risk of not being able to get current shows because of the rigging requirements.”

The theater previously only supported 30,000 to 40,000 pounds of stage rigging, which supports curtains, scrim, scenery and the symphony’s acoustic shell. To meet traveling show requirements, the theater needed about 125,000 pounds.

The team removed more than 100,000 pounds of the concrete roof from the 1930s and corrected a double-shear connection on the hanging rods. New grading, channels, and framing beams were installed to provide a new fly loft that was orthogonal to the playing surface and the proscenium opening—aligning everything properly.

Using billet steel sections, the crew upsized the grading so motor loads could be mounted anywhere on the grading to safely carry 4,000 pounds per motor pick. The end result not only increased the rigging load but reduced the net load on the structure.

GROWING INTO THE CITY

The 2-story, 4,800-square-foot expansion necessitated new framing, footing removal, lateral modifications and some unique metal scrims. The historic building is now wrapped in a glass box of sorts with some of the original terra cotta and brick detailing still displayed.

To keep loads off the existing structure—which was fairly brittle—the team set about using a sawhorse-like construction around the existing footings and aligning new columns with existing columns. In another tricky conversion, some of the existing concrete footing was cut away before installing the elevator. Concrete shear walls were installed, which helped hold the catwalk, along with columns and foundations to support the arbor in compression rather than suspension.

Because of the building’s height and width, there wasn’t a manufacturer who could provide typical storefront or curtainwall exterior shades for the theater’s glass exterior. In addition to carefully considering load-bearing needs, the design team used an energy model to understand how the dimensioning of shades could impact the solar heat gain on the building. The resulting façade has an angled scrim opening toward the street corner, resembling a theater curtain being pulled up. The glass itself also keeps the building in conversation with the city—on one side reflecting the iconic Masonic Temple located across the street.

With these improvements, Cushing Terrell was able to increase the height of a couple ceilings and improve the circulation around the building, allowing space for socializing before and after the show, as well as during intermission. The city of Billings allowed the theater to expand into the street, part of the city’s efforts to keep this cultural center in the downtown area. The team remained cognizant of the interactions between city and theater and highlighted this with the street-facing windows on each level. Even the elevator doors open toward the windows, and the staff working concessions face the city. At street level, the first floor is cut out at the corner to further integrate the city into the building and vice versa.

After almost a century of existence, Alberta Bair Theater now has the bones, backstage and cultural presence to last at least a century longer.

Be the first to comment on "To Ensure a 90-year-old Theater Could Endure, It’s Given New Bones and Better Integrated into Its Downtown Surroundings"