Anyone who has ever hosted a party in his or her home knows guests will invariably gravitate toward and congregate in the kitchen. As television celebrity and cookbook author Ted Allen suggests: “The kitchen is the most special room in the house. It’s a place for adventure—not drudgery, but discovery, sharing and showing off with friends, trying new ideas.” 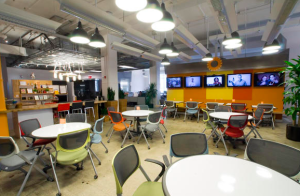 To improve interaction among employees, all segments of the LivePerson office connect at the town square, an open seating and eating zone where employees can take a break, have a discussion or hold an informal meeting.
PHOTO: Dave Pinter

Allen verbalizes what corporate America has picked up on and embraced in recent years: kitchens, cafés and break rooms are the places where employees are most likely to gather spontaneously throughout the day, where creativity flourishes and new ideas are shared. In addition, today’s employees have been untethered from their desks and encouraged to work just about anywhere, including break rooms—thanks to the mobility wireless technology affords.

Not Your Father’s Water Cooler

First thing’s first: These days, no one is calling the corporate break room the “break room” anymore. That term conjures images of the water coolers of a bygone era where employees might take a 10-minute break to stretch their legs and then shuffle back to their cubicles or private offices. The new language for casual spaces in the workplace better reflects the functions that are taking place within them.

“There’s a whole slew of names, but the idea is that they’re starting to incorporate many functions into one space,” notes Sven Shockey, AIA, LEED AP BD+C, principal at SmithGroupJJR, Washington, D.C. “They’re kitchens, they’re cafés, they’re social spaces, they’re meeting spaces all combined into one.”

Likening the break room to the ancient Greek concept of the “agora”, or gathering place, Angie Lee, FAIA, IIDA, LEED AP BD+C, vice president at SmithGroupJJR, says these new spaces function more like a marketplace where people come to interact and grab a cup of coffee, have lunch, socialize or have meetings. “The trend that we’re seeing is that these types of social gathering spaces—you can call them break rooms, or cafés, kitchens, living rooms, family rooms, what have you—are starting to become the heart of the work environment,” she says.

Whatever you want to call it, the idea of a cramped “break room” with four walls and a door has also gone by the wayside. With the open office plan having taken root in corporate America, flexible work environments are blurring the lines between formal and informal workspaces, and perhaps nowhere is this more visible than in the break room. 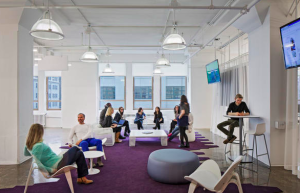 Traditionally “break rooms” have been relatively small in size and placed in the back of the office, out of sight from clients or prospective recruits to prevent them from discovering a mess left for the nighttime cleaning crew. The break room has since been relocated to the center (or front) of the office and has grown in size, often reducing the need for dedicated workspaces or meeting rooms.

“When we’re planning break rooms what we try and do is minimize the quantity of them, so instead of having four or five coffee bars spread throughout the floor, we’re trying to create one, central kitchen area where everyone can go because it encourages people to cross-pollinate;
it encourages interdisciplinary discussion,” says Denise Cherry, principal and design director at Studio O+A, San Francisco.

Function, then, becomes a key driver in deciding where to locate a café or town hall to ensure the space is used as intended.

American Standard Kitchen and Bath Products to Be Distributed by Ferguson

1 Comment on "Today’s Corporate Break Rooms Offer Employees a Casual and Flexible Yet More Engaging Place to Connect, Recharge and Even Work"