New York-based Turner Construction has a 110-year history as an international construction services company that prides itself on “embracing emerging technologies and processes” while taking on complex projects and making a difference in the lives of its clients and in the communities it serves. The builder boasts a staff of 5,200 and completes more than 1,500 projects per year.

When it came time for the 110 employees of its Columbus, Ohio-area office to move into a new space, Project Manager Mark Ogden, Turner Construction’s Columbus business development engineer, believed it was important to capture Turner’s history as a contracting company through the design and aesthetic of the new space. Ogden and other members of the site-selection team, opted to move closer to Columbus’ urban core—ultimately, closer to the prominent projects Turner has completed, including Nationwide Arena, Nationwide Children’s Hospital, Hilton Downtown Columbus and Huntington Ballpark.

Ogden and his colleagues desired a space unlike their suburban 1980s nondescript office building. They wanted a building with character and the right amount of square footage, ample onsite parking in a walkable community—a tall order for a downtown location. However, the team was willing to retrofit a building to demonstrate Turner Construction’s dedication to sustainability and energy efficiency, as well as its attention to detail.

A circa-1910 former mattress factory in an up-and-coming area of Columbus, known as the Arena District, met the team’s requirements. Vacant for approximately 30 years, the 2-story wood-frame, red-brick building certainly would be a rehab project but the Turner team was up for the challenge. “The building had a lot of character and could be made into something we could be very proud of,” Ogden explains. “From a use perspective, there were good daylighting and openfloor- plan opportunities. We wanted kind of that raw industrial look that this building was a perfect fit for.”

“Turner prides itself on its craftsmanship,” adds Carrie Boyd, director of interior design for M+A Architects, Columbus, which served as project architect. “The employees felt their existing space didn’t show that off at all. When looking for a building, one of the really important things was that in a renovation they could really show their craftsmanship and attention to detail.”

Although the mattress factory was in good structural condition, it didn’t have electricity, HVAC or lighting. Openings in the exterior walls were windowless and boarded up. Because of its condition, not everyone echoed Ogden’s enthusiasm for the property. “When I held the pre-bid meeting, people looked at me like I was crazy and that Turner was crazy for moving into it because they just didn’t see the vision,” Ogden recalls. 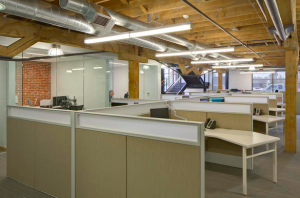 Turner leases 14,000 square feet of the 17,000-square-foot former mattress factory from The Wittmann Co., Columbus, an established real-estate development firm that is dedicated to finding properties “that are ripe for redevelopment”. PHOTO: Turner Construction

However, Ogden knew the mattress factory was the blank slate the team needed to create an office that demonstrated Turner’s talents. “The transformation is amazing,” Ogden notes. “When people look at what it was when we first did the walkthrough and what it is now, they’re shocked.”

A Building with Potential

“It was probably the building [in Wittmann’s portfolio] that needed the most work and would require a significant amount of capital to get it to a leasable state,” Ogden says. “I think Wittmann put it off to get some of its other more market-ready sites on the market. On their pecking order, it was just good timing as far as when they wanted to rehab the building and when we were wanting to occupy the building.”

And that quick timeline—February to June 2012—left little time to question decisions. Although Ogden notes he and the team “had their hair on fire” most of the job, there were no setbacks. “The renovation took place so quickly we honestly didn’t have any time to look back and ask what we got ourselves into because we were always looking forward and driving toward that goal,” he says.

Be the first to comment on "Turner Construction Uses Materials and Subtle Details In Its Columbus, Ohio, Office Renovation to Demonstrate the Company’s Dedication to Its Craft"