When older mechanical systems fail to perform at needed levels, it’s not uncommon to remove the old equipment and start fresh. After all, HVAC systems’ innovations over the past 20 years provide exceptional efficiency. Delivering the best return on investment isn’t always about swapping out the old with the new and improved, however. Skillful designers and engineers recognize thorough energy-load calculations and mixing existing equipment with newer technology can serve up a sweet spot for owners’ budgets and long-term operations. 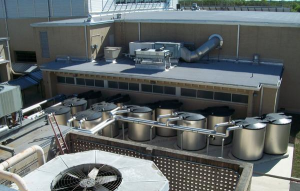 In San Antonio, a growing student population inspired the Alamo Heights Independent School District (AHISD) to procure a $44 million bond for needed upgrades and expansion. The first set of upgrades included roof replacement, the installation of photovoltaic arrays, insulation, and efficient lighting fixtures and bulbs to the high school campus. Then, the district added a new 12,000-square-foot Fine Arts Building to the campus’ five-building complex.

“The district’s operations budget includes teachers’ salaries, so every place we can save money directly benefits the students,” notes Lowell Tacker, principal at LPA Inc., San Antonio, who designed the new Fine Arts Building. “With summer school and community uses here, the facility is active year-round, even in the hottest summer months.” In a highly collaborative process, the owner and multi-discipline team examined strategies that would allow them to condition the new and existing spaces without adding operational costs. “When we considered adding an ice-based energy storage system to the central plant, we ran the numbers and they looked good,” he says.

AHISD had three chillers providing cooling for the 325,442-square-foot campus. The school’s peak electricity demand occurs from 3 to 5 p.m.—the same time of day the electric utility charges a higher price per energy unit. The team knew reducing electricity demand during peak time would equate to real savings for the district. The thermal storage system employs two of the existing chillers to create ice from 10 p.m. to 4 a.m. when electricity prices are much lower. The ice is created and stored in 12 cylindrical tanks approximately 9 feet in diameter and 12-feet tall housed outside between the auditorium and central plant. 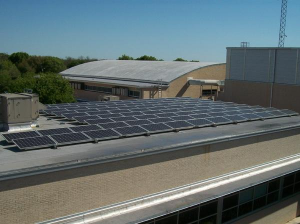 A $44 million bond helped pay for a roof replacement and installation of photovoltaic arrays to improve the school’s energy efficiency. PHOTO: CALMAC

As interior spaces heat up during the day, fluid in the existing mechanical system’s pipes passes through the ice storage and cools. Pumps distribute the cooled fluid in the pipes throughout the school and fans blow over the chilled pipes providing cool air to the spaces. Each night the system makes enough ice for the campus to use during the day and then recharges the cycle.

“The system provides 1,944-ton-hours of cooling capacity. If it’s not really hot outside, you don’t need the chillers to go on at all, as running the fluid through the stored ice maintains comfortable temperatures,” Tacker explains. “Five months out of the year we hit at least 95 degrees Fahrenheit daily, but now when the chillers need to turn on during peak hours, they only supplement cooling from the banked ice system rather than working to generate the full cooling load.”

Tacker says all of the district’s energy improvements during the past five years led to a 30 percent cost reduction, and the ice-based energy storage system reduced peak energy demand costs by 17 percent. “Bear in mind that 17 percent reduction occurred despite an increase of 12,000 square feet of space for the new Fine Arts Building,” he asserts. “It was great that we had so much in-place infrastructure to work with and just adding the ice system gave us the needed cooling capacity. In addition to energy efficiency, the system is low maintenance and very easy to operate. By simply designing smarter, the district is saving a lot of money and we’ve revitalized a 1950s campus and made it cost-effective to operate for another 50 years.”

Ultrasonic Flow Sensors are a Finalist at AHR Innovation Awards

Harrison Energy Partners Is A Service Alliance Provider for Daikin