Rather than the need for cooling, a boutique hotel in Santa Fe, N.M., grappled with heating issues. The Rosewood Inn of the Anasazi stands at an elevation 7,000 feet above sea level where extreme cold winter temperatures are the norm. Guest comfort is of primary concern, so when the hotel’s old condensing boiler sputtered with unreliable operations and offered only 76 percent energy efficiency, management needed a solution. 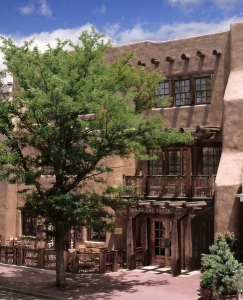 The Rosewood Inn of the Anasazi is a boutique hotel in Santa Fe, N.M., that grappled with heating issues. Standing at an elevation 7,000 feet above sea level where extreme cold winter temperatures are the norm, guest comfort is of primary concern.

About the size of a small car, the old boiler was located in a small basement room 2 stories below a parking garage and beneath a metal hatch that had been permanently sealed to prevent water intrusion. To replace it with a similar unit, the boiler’s removal would require cutting through the ceiling to open the hatch and using a hoist to lift the boiler out and install a new one. Hotel owners were wary that cutting the hatch area could create future leaks and the removal process would disrupt guests.

Rather than a conventional boiler replacement, Stephen Sanders, HVAC Department manager at Architectural Metal, Santa Fe, approached the project from a different vantage point. “There was access from a two-flight stairwell near the boiler room and an elevator rising between the basement and parking structure,” Sanders explains. “That’s when I realized we needed a redundant array of boilers: several small boilers to do the job instead of one large one.”

An analysis of the building’s energy load revealed the existing boiler was larger than necessary, rated at 3 million Btus. The hotel building’s heating needs plus the equipment required to heat and cool the industrial kitchen’s make-up air brought the load to only 1.3 million Btus. The 18- by 7-foot boiler room included existing domestic water heat boilers, leaving a floor space of 11- by 7-foot for the new boilers. Working within the dimensions of available space, Sanders’ team added three small but powerful high-efficiency boilers that met the energy-load requirements.

After disassembling the old boiler and cutting it into pieces, the team hauled the sooty portions up the stairwell and took them to a recycler. Then they brought the three new small boilers down the elevator. “We also purchased a prefabricated pipe and metal rack that connects the boilers and building systems together and holds the boilers in place,” Sanders remarks. “It made installation much simpler to lock it all together, like a Lego set.” 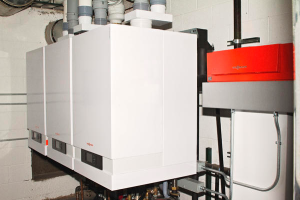 With only 11 by 7 feet of floor space in the boiler room, three small but powerful high-efficiency boilers were installed that meet the energy-load requirements.

Halfway through the planning phase, Sanders’ team noted the hotel’s existing fan coils were oversized. A total of 70 fan coils (one to heat each guest room) supply heated air for the hotel. These oversized coils don’t require extremely hot water in the pipes to produce warm-air temperatures, which means the boilers can run at lower temperatures, generating greater efficiencies. “The maximum heating-system water temperature is 140 degrees Fahrenheit. When it’s 10 degrees Fahrenheit outside we only needed 132 degrees Fahrenheit to keep the building warm,” Sanders says. “The boilers each modulate between 20 and 100 percent firing power and come online one at a time as needed.”

Rated to operate for 25 years, the system’s cost payback will be in 10 years, leaving 15 years of virtually free operation. The owner’s facility engineer was skeptical about the effectiveness of the smaller-sized system, so Sanders added a performance guarantee. “Given my energy calculations, the efficiency of the new systems and the oversized fan coils, I was sure it would work,” Sanders asserts. “In real-time performance, the third boiler almost never comes on.”

Measuring Electrical Success Can Be Done at the Micro-level