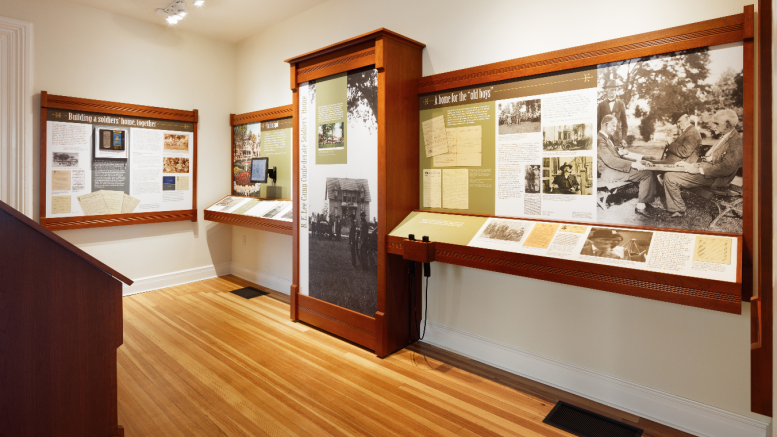 The Robinson House is an Italianate design with Victorian embellishments and was erected circa 1820 as a family farmhouse and expanded in 1856 and 1886. The structure was converted into the R.E. Lee Camp No. 1 before it became part of the Virginia Museum of Fine Arts (VMFA) in 1964.

The Robinson House was named to the National Register of Historic Places in 2013 and is one of the oldest buildings in the Boulevard Historic District of Richmond, Va. The VMFA’s goal was to convert the property into an interpretive gallery and regional Visitor Center (First Floor) and office space (Second and Third Floors). Therefore, the project included rehabilitation of the existing 7,600-square-foot structure, the Robinson House, and an accompanying addition to the building (approximately 3,200 square feet).

In an effort to reconcile the home with its more contemporary context, the design team proposed an addition and site improvements that bridge between the modified site and the existing home. The new addition is subordinate in scale to the existing structure to allow the original architectural detail of the house to remain discernible to the visitor.

The goal was to rehabilitate and repair the existing structure, maintain historic fabric to extent possible, install all new mechanical, electrical and life safety systems, all while removing barriers that previously isolated it functionally and visually. To achieve the new functionality, improvements including a new egress stair, bathroom facilities, an elevator, and new entrance were added. To minimize impact on the existing historic fabric, the team proposed that most of these new functions be housed in an addition built to the rear (north side) of the home.

The design of the addition is intended to be consistent with the Secretary of Interior Standards for Rehabilitation: compatible, differentiated, subordinate in scale to the existing structure, and placed to the rear of the existing building where more recent modifications have occurred. The addition is clearly differentiated from the existing house while being consistent with the overall character of the building. The addition is situated to respond to major site axes and to interact with the majority of current visitors to the museum who circulate through the property via the adjacent parking deck.

Interior work included restoring the space to reflect historical accuracy. The first-floor exhibition Across Time: Robinson House, Its Land and People interprets the multilayered history of the museum grounds from the 17th century to the present. Richly illustrated with maps, prints and period photographs, the narrative includes Virginia’s native peoples and English colonists; an antebellum family and the enslaved people who labored for and sometimes escaped from them; the R. E. Lee Camp Confederate Soldiers’ Home—a veterans’ facility born out of a spirit of reconciliation between North and South.

A Historic Department Store Is Transformed into Modern Offices, Retail and Restaurant Space, and 23 Loft Residences