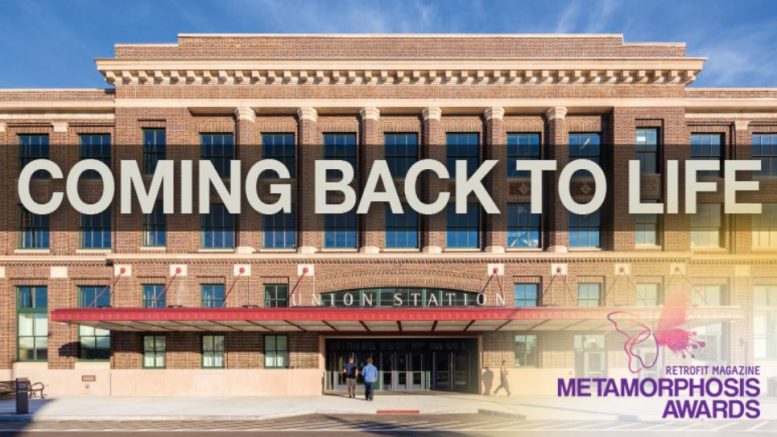 The late architecture critic Ada Louise Huxtable once observed, “Nothing was more up-to-date when it was built, or is more obsolete today, than the railroad station.” While it’s true that the rail industry in the U.S. experienced steady decline with the rise of interstate development and car ownership in the 1950s, with many stations closing down as a result, some of these historic buildings are being modernized and coming back to life as vital parts of their communities.

A shining example of this revitalization effort is the newly renovated Springfield Union Station, in Springfield, Mass., a once bustling transportation center left forgotten for 40 years that has since been given new life and purpose thanks to the team at HDR’s Boston office. As a Metamorphosis Awards winner in the Historic category, Union Station has once again become a center of the community and an extension of the public realm, paving the way for the future of the city and its residents.

AFTER PHOTOS: Dan Schwalm, Courtesy of HDR and BEFORE PHOTOS: HDR

SALVAGING A PIECE OF HISTORY FROZEN IN TIME

Constructed in 1926, the depression-era Union Station served as a major crossroads of the Northeast and was a prominent building in downtown Springfield. Its 11 tracks and the adjacent Baggage Building supported the arrival and departure of more than 90 trains per day with seating to accommodate 650 travelers, as well as restaurants, news stands, barber shops and other amenities. Eventually, Union Station closed its doors in the late 1970s as rail use declined.

“It looked like it had just been abandoned,” recalls Megan Doyle Mele, interior designer at HDR. “There was old office furniture—desks, papers that were left—just like people walked out and never came back.”

Joe Mamayek, AIA, LEED AP, design principal at HDR, described the existing conditions in the building “like memories that were frozen within the space.”

While Union Station sat in decay, Rep. Richard Neal (D-Mass.) made it his mission to see this building come back to life and once again hold an important place within the community. Neal, along with other elected officials, local citizens, and the Springfield Redevelopment Authority, agreed to transform Union Station into a modern, multi-modal transportation hub and an investment in infrastructure.

CHALLENGES TO PRESERVATION AND MODERNIZATION

After interior and exterior assessments, the HDR team, along with assistance from a preservation architect, developed a strategic intervention plan based on a tiered system of architectural and historical significance. From the evaluation it was decided the exterior façade, train platforms, canopies, and interior spaces of the main concourse held the greatest architectural and historical significance. The exterior brickwork was stabilized and repaired, new energy-efficient windows similar to the originals were installed, and exterior lighting was modernized.

Having fallen into neglect over the years, a leaking roof led to extensive water damage. The unsalvageable plaster arches, walls and ceiling needed to be completely replaced. The team recorded and replicated the extensive plaster molding details that adorned the arches and ceiling, and the original light fixtures were replicated and relocated to their previous locations. Even the station’s iconic clock was restored to working condition and placed back in its rightful place—as though the 40 years it sat in neglect had not even passed.

To complement and simultaneously distinguish itself from the existing design language, a material palette of porcelain tile, metal and glass was selected. “[We] embraced a contemporary approach, avoiding imitating the past or possibly erring on historicism,” Mamayek notes. “Design solutions were ‘distinctive’ yet respectful of the historic character of place, including massing, proportions, scale, color, materiality and details of the campus.”

To showcase the rich history of Union Station, the design team collaborated with the client and the Springfield Museum to incorporate a series of wall murals and artifacts that speak to Union Station’s past while looking ahead to the future. In addition to restoring and preserving the building’s history, the program also required the modernization of amenities. To that end, new security technology and customer-service counters were installed within the concourse.

Finally, the once heavily used Baggage Building and an old parking structure were to give way for the construction of a new parking garage and open-air bus terminal. The south foundation wall of the Baggage Building was originally constructed to support the Springfield Railroad Terminal, causing significant complication to the removal process. To overcome the challenge, innovative soil nails were installed to support the massive wall throughout the demolition.

To ensure the project would not only bring forth a renovated Union Station, but also self-sustaining economic and real-estate development, a team of market economists, transit specialists, and architects provided planning, advisory services and real-estate feasibility studies. The tangible synergies of the new multi-modal transportation hub qualify Union Station as a Transit Oriented Development (TOD). This classification defines a type of urban development that capitalizes on its access to public transportation based on proximity to housing, office and retail amenities. TOD promotes urban growth, walkable communities and an increased ease of public transportation access.

More importantly, however, it has also re-instilled a sense of civic pride within the community it serves. “You start to see the community really feel a sense of pride of highlighting this building that is now brought back to its original beauty, and they’re proud to have it in their community,” Mele observes. True to the vision of Rep. Neal, this building is now a vibrant part of the Springfield community once again—a fact more significant than simply rescuing an aging structure from decay.

“On the opening night, what was more evident than anything else, more important than the bricks and mortar of the building, was actually seeing the community come back into this building and re-experience a space, which they couldn’t do for 40 years,” Mamayek says.

2 Comments on "Vacant for 40 years, the Historic Springfield Union Station Now Is a Gateway to the Future"