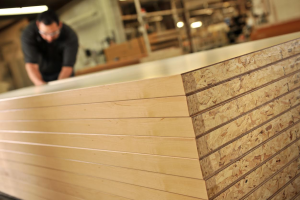 In 2010, the architectural wood door manufacturer made a commitment to maintain fixed lead times, filling standard orders within two to three weeks—any time of year. In an industry that often treats lead times as a moving target, VT continues to achieve the new standard for customer service, according to Jason Farver, vice president of the Architectural Wood Door Division for VT Industries.

“For years, manufacturers have expected customers to deal with and juggle variable lead times from the factories,” Farver says. “It doesn’t have to be this way. At VT, our aim is to make your lives easier, by always being ready to serve with the fastest, most consistent lead times in the industry.”

Over the past five years, VT has moved equipment, restructured operations and made innovations to keep up with demand and stay true to its model of producing quality products efficiently and reliably. Farver says it’s all part of the VT philosophy of continuous improvement.

“We’re not just building doors,” he says. “We’re building trust. We work hard to make sure builders never have to worry about getting their wood doors on time. In our hectic world of managing projects, our goal is to take this variable off your plate.”

That focus has helped VT maintain the fastest lead times in the architectural wood door industry. The company finished 2014 with the best on-time delivery performance in its history and is on track to improve on this record in 2015.